We got some reasonable observing in at the star party, despite poor transparency on Thursday and Friday nights. Sunday night was pretty transparent but hampered by a stiff breeze, which forced Owen Brazell to call it a night at 3am because his 22″ was moving around so much that it was impossible to observe and also becoming dangerous, both to observer and scope. I ended up dismantling mine totally and stowing it beside the chalets, out of the wind. Others, in more sheltered locations, continued for a while longer before also giving up for what was left of the night.

I didn’t get through as much of my lists as I would have liked, due mainly to the poor transparency and to Sunday night/Monday morning’s stiff breeze. I spent a lot of time in Leo, Virgo and even down in Crater and Corvus. I’m not going to post all the observations I made but, suffice to say, it was nearly all galaxies apart from NGC 4361, a planetary nebula in Corvus (and this was a second visit, I’d previously observed this in May 2008, with my 12″ Dob), NGC 5634, a globular cluster in Virgo, plus some eye candy in the form of the best views I have ever had of M42 (come on, it’d be rude not to!), Saturn, Mars and NGC 869/884 (the Double Cluster).

Thursday, 22nd March, was the day of arrival. I arrived late morning, and set up my scope once I’d stowed my other stuff in the chalet and parked the car. Other people were also arriving through the afternoon and the ‘serious visual observers’ area (as designated) soon began to fill with large Dobsonians plus some smaller fry, in the shape of a couple of SCTs and a few refractors. 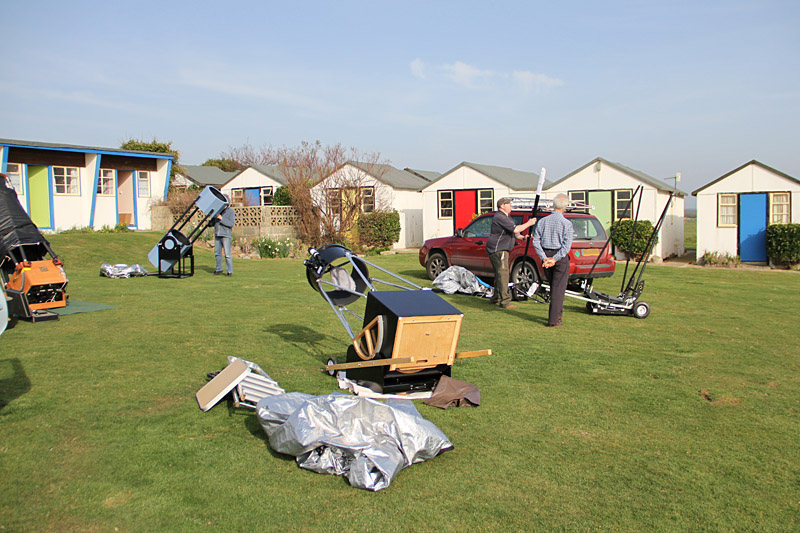 The visual area, with large Dobs. Mine, minus shroud, is in the foreground.

Thursday night was fairly cloudy, with a lot of high stuff, mist and generally poor transparency so I messed about for a while, looked at one of my favourite galaxies NGC 4565 and its neighbour NGC 4562, as well as NGC 4494 and some bright eye candy. I packed up at 2330 GMT and went to bed. Apparently it cleared a while later but as I was tired I wasn’t that unhappy about missing it. We did see an iridium flare earlier in the evening.

Friday was clearer but, as chairman, I had to go to the VAS meeting in Newport first but I managed to escape at half time because the sky looked promising. I got back to the observing field at around 9.45pm and set up. The transparency still wasn’t the greatest but I got my observing lists out and started hunting for galaxies in Leo before moving on to Virgo.
A lot of the session was spent in and around the Realm of the Galaxies in Virgo, as soon as it was high enough out of the crap in the atmosphere. Here, the 18″ really showed what it can do, especially given the fact it had more than 24 hours to cool down to ambient temperature, something it doesn’t always get to do at home. Galaxies were simply everywhere. Find one and you have found dozens, maybe even hundreds, including some faint little sprites not on my charts (these were evident on the Sunday night when the transparency had improved and the naked eye limiting magnitude was 6.4) and, what’s more, the brighter NGCs and the Messiers showed detail – this is what I bought the 18″ for! Simply put, I got totally blown away by these galaxies!

Saturday evening started off with an ‘eye-candy’ session. The eye candy included M42, which was simply stunning in the 18″, and several people commented on how good my telescope and mirror are which pleased me no end, of course, as it is nice to know your ‘investment’ is as good as the money it cost. It does need a few modifications and what I want to do is get a decent focuser for it (I’d originally ordered it with a bog-standard rack-and-pinion focuser, on grounds of cost, which does the job of course, but could be better) such as a Moonlite Crayford or a Starlite FeatherTouch, adjust my crappy shroud* (easily the one poor thing about the scope is that the shroud is rubbish) so it doesn’t blow about all over the place, plus waterproof it to prevent dew soaking through and dripping onto the mirror, and finally get round to adjusting the position of the Telrad base, which I’ve been meaning to do for ages** (I had a brain-fade when putting it on the scope and put it in the wrong place – it still worked, of course, but meant I needed to walk round the scope to look in the eyepiece). I’d also like to put some sort of light-absorbing material on the truss poles to reduce light scatter and improve contrast.

Most of the session was, again, looking for galaxies. I spent a good amount of time in Corvus and Crater, which meant bending down or kneeling on the ground to look through the eyepiece – it therefore wasn’t surprising when I had severe knee pains and back ache for three days afterwards, but at least I managed to cross a few of the objects off my observing lists.

Sunday was much clearer. After a very interesting visit to St Catherine’s Lighthouse in the afternoon, we spent the evening in the Crown pub at Shorwell, before returning to BHC and a stunning sunset. 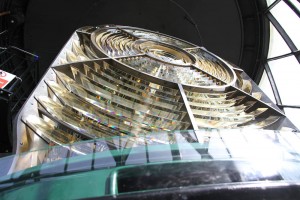 The lantern at St Catherine's Lighthouse

Although Sunday night into Monday morning was very transparent, a stiff breeze had arrived, which made observing difficult. I gave up by 3am, fearing my scope would blow over, so I dismantled it and moved it to a more sheltered location, with other people packing up shortly afterwards. As Monday was the day we all went our separate ways, I stowed a few things I didn’t need, such as the truss poles and a few other bits and pieces, in my car. I did, however, manage to observe some more galaxies in and around Virgo, as well as the globular cluster NGC 5634.

It was an excellent star party and I had a good time. This was the 5th IOWSP and the 4th I have attended (I missed 2011); in 2008 and 2009 I could only come for one evening and went home afterwards while in 2010 I came for two nights, camped and nearly died of hypothermia – I have never been so cold in all my life! This year, I was at the star party for all four nights, staying in a chalet, and it was so much nicer and I also felt more part of things.

Next year’s star party is in early March. Unfortunately I think it coincides with OzSky 2013 which I would like to go to, depending on finances.

* I have altered the shroud, using some velcro and I have attempted to waterproof it with some tent waterproofer I bought in Mountain Warehouse – this failed but I’ll get some better stuff from Goodyears in Sandown.
** I have now altered the Telrad position. Much better.

For all the photos from the star party, please click here.