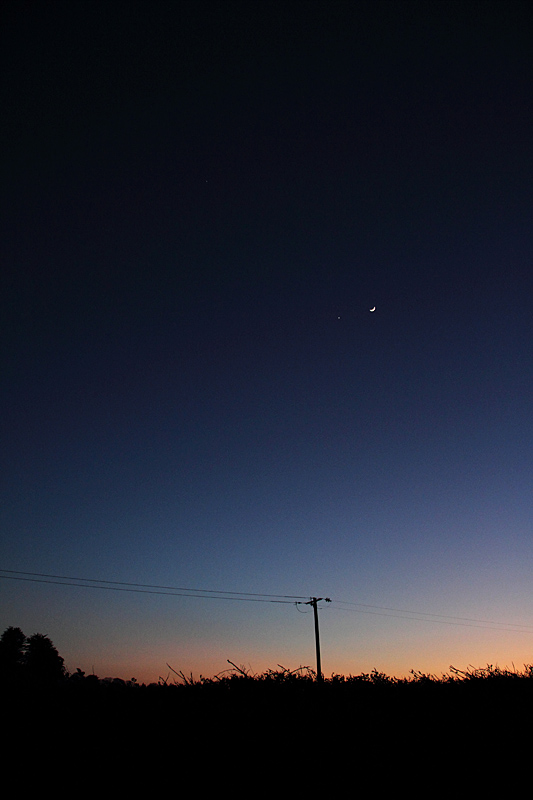 The Moon, Venus and (upper left of them, but fainter) Jupiter

February has a reputation for being a disgusting, wet and horrible month, at least here in Britain. This February, however, has been markedly different so far, very spring-like (at least in the latter couple of weeks) and with some clear nights. Climate change? Maybe or, as likely, maybe not. Who cares, I hate cold and/or wet weather, so if it’s like this for evermore I’ll be happy!

I decided to have a session with my small 20cm (8 inch) Celestron Newtonian, simply because I’d felt sick all day and didn’t feel like going to the top of the garden and getting the big scope out (although, paradoxically, the 18 inch is easier to get out and use – wheel out of shed, collimate, stick eyepiece in and observe). I am not a massive fan of equatorial mounts but the small Newt can be fun to use, when it isn’t in one of *those* moods and being bloody awkward, and reminds me of my early days in astronomy 20 years ago.

The transparency was pretty dismal, so I stuck to open clusters in and around Monoceros.

NGC 2215, open cluster in Monoceros – Easily found at 36x. A detached, loose group of stars with an irregular shape. There are about 18 10-11th magnitude stars plus many more fainter ones in the background. No dark areas. 36x, 100x.

NGC 2324, open cluster in Monoceros – At 36x, this showed an irregular cross shape of brighter stars on a hazy background of fainter stars. The longer axis of the cross points south, where there is a roundish patch of just-resolved stars which gets larger with averted vision. At 100x, the patch is grainy and barely resolved. The stars are all white. 36x, 100x.

NGC 2252, open cluster in Monoceros – Lying just to the north of the Rosette Nebula this detached open cluster is easily found at 36x. It’s a largish, rich open cluster shaped like a rounded ‘Y’ or a wish bone, whose ‘arms’ spread to the SW and SE from the stem, which runs N-S. There are around 12 stars on a grainy background but 100x reveals more of them although many fainters ones stay unresolved. 36x, 100x

NGC 2251, open cluster in Monoceros – A fairly large irregular group of faint stars. A long chain of 11 stars stretches off to the south-east while a short line of 3 stars goes off to the north-west and on the west side is a semi-circle of 5 stars. The overall shape of the cluster reminds me of an ‘Aladdin’s lamp’. There is some nebulosity involved in the southern chain, which is visible even without filters. The cluster is elongated NW-SE. 36x, 100x

By this time, as the dew was making life awkward, I packed up. I have to confess that open clusters are not my favourite class of objects to observe; I much prefer galaxies, globular clusters and planetary/diffuse nebulae but it is nice to look at something different from time to time. Also, doing the Herschel 2500 means that I have to observe open clusters as, although most of the H2500 are galaxies, there are a good number of open clusters in  there too. 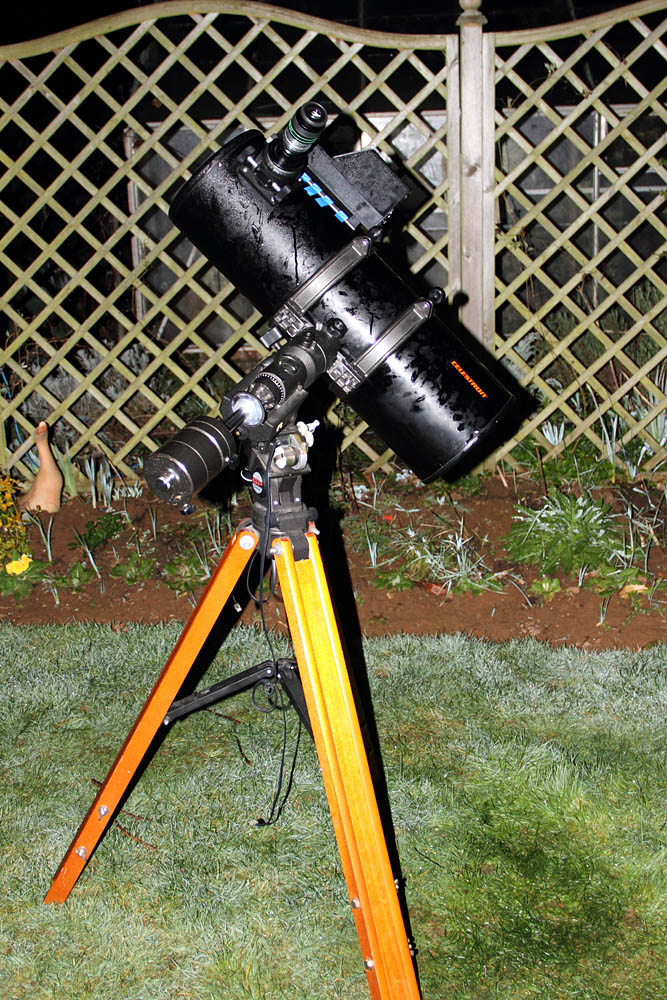 The 8 inch Newt showing how dewy the conditions were.

I am considering the possiblity of building a run-off roof observatory, depending on costs and other factors. I didn’t use the big scope this session but I am confined to the top of the garden when I use it, meaning I can’t get away from neighbours’ lights. Also, the proximity to a footpath (just a few feet away the other side of a hedge) means that, although it is extremely rare for anyone to be walking along it at night, I feel a little exposed, although the hedge is six feet high and fairly thick.
I put up a tarpaulin as a light screen each time I want to observe but this is, frankly, a pain to do and I have to remember to do it each and every time I want to observe. Not only that, it is noisy to erect and attracts attention so, if I can put up a roll-off roof observatory, adapted from an ordinary wooden garden shed, I can incorporate a light screen with the added bonus of not having to wheel my telescope outside each time, not that this is difficult. Also, while the plastic shed I currently use is great, it is not insulated and my stuff gets damp from condensation (I can see myself having to get the 18 inch mirror recoated in a couple of years). A more permanent wooden structure, which will be properly insulated, and on a concrete base, should prevent this. It’ll be a year or two before this happens, though, especially as I have a couple of foreign observing trips lined up.