Finally! After five months of endless cloud and the odd clear spell being around a gibbous or full Moon, I have actually managed to do some observing! It’s been a totally cloudless day, a rarity in itself over this winter (which has been the cloudiest winter for 50 years, as well as one of the coldest), and the clouds stayed away as it got dark so I opened the shed and pulled out the scope. Everything seemed fine, the collimation was not too far out and the shed and silica gel had done their job of keeping the scope protected during some fierce winter storms and snow and the mirrors mould-free.

I decided to knock off the remaining Herschel 400s I had left to do in Orion, left over from last year. The one failure was NGC 1788, no matter how much I searched, I couldn’t find this little bugger. I think it had got too low.

NGC 2169, open cluster in Orion – This is an interesting cluster which looks like the number 37, upside down. The ‘7’ is the westernmost part of the cluster. It has three bright stars and four fainter ones which make up the number 7.
The ‘3’ is slightly larger and brighter than the ‘7’, it also has three bright stars plus one slightly fainter one and six much fainter ones. There is a clear gap between the two components with no stars between them.. Very attractive. 69x, 101x

The sketch of 2169, below is not recent. It’s a sketch I did some years ago but I thought I’d add it in to give an idea of what it looks like. 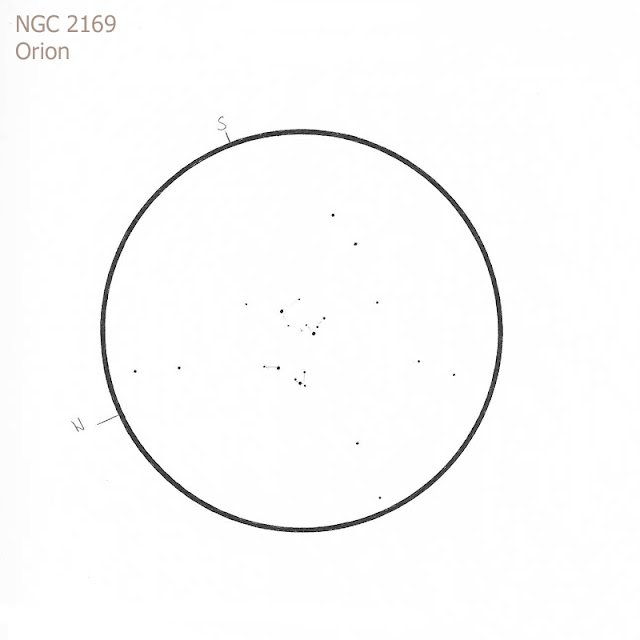 NGC 2194, open cluster in Orion – Easy to find. Quite faint but rich. There are a few quite faint, but distinct, stars in front of many, many fainter ones. Partly resolved. Detached – stands out well despite faintness. 69x, 101x

NGC 2186, open cluster in Orion – Awkward to find, especially as it’s not shown on my Sky Atlas 2000.0 so I had to come back to the house and print off a MegaStar chart with telrad circles on it. Not easy with one eye tightly shut to preserve its night vision! Located within a triangle of bright stars, which points east. Faint. Poor. Not concentrated. 69x.

Hunted for NGC 1788. Got annoyed with it and gave up as I just could *not* locate the thing, so I moved on.

NGC 1999, reflection nebula in Orion – This was easy to find, as it is located just south of the Orion’s Sword complex. Small, round and bright. Fuzzy with brighter middle. UHC does not improve the view much if any while OIII is totally useless. 69x, 101x, UHC, OIII.

It was a short session, slightly under a couple of hours. I’d inevitably forgotten a few items, such as printing off MegaStar charts and other bits I had to return to the house for, but it was a good session and I’m pleased. It’s nice to be back, although I’d not been idle because I’d done a lot of birding (my other interest) over the winter. The Moon’s on the rise again so, after this coming weekend, it might be a while before my next session. And I managed to avoid trampling the daffodils too badly in my observing patch, there were casualties but only one or two.

This is the sort of weather we’ve had over the winter (observing shed is the grey one in the background). Cloud, cold and more snow than usual. 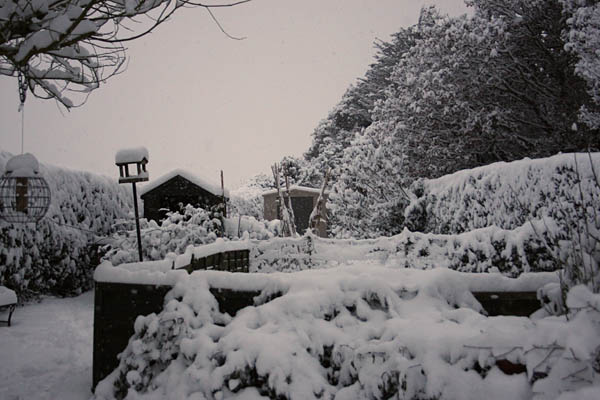 I never did get to the Isle of Wight Star Party this year. I intended to, but caught a bad cold so, deciding that I would not be thanked for sharing (as well as not feeling like standing around in the dark with it) I didn’t go.