The evening of 21st August looked promising, with a few high clouds, so I set up the 8 inch again. I wanted to get the 12 inch out but I’d been out all day, and had got up at 7.30 that morning so I frankly couldn’t be bothered. The clouds made a spectacular red sunset again so their photo was taken. The quality isn’t the best because my wide-angle lens, a basic Canon 18-55 kit lens, is as ropey as hell although a new lens is pretty low on my list of priorities. 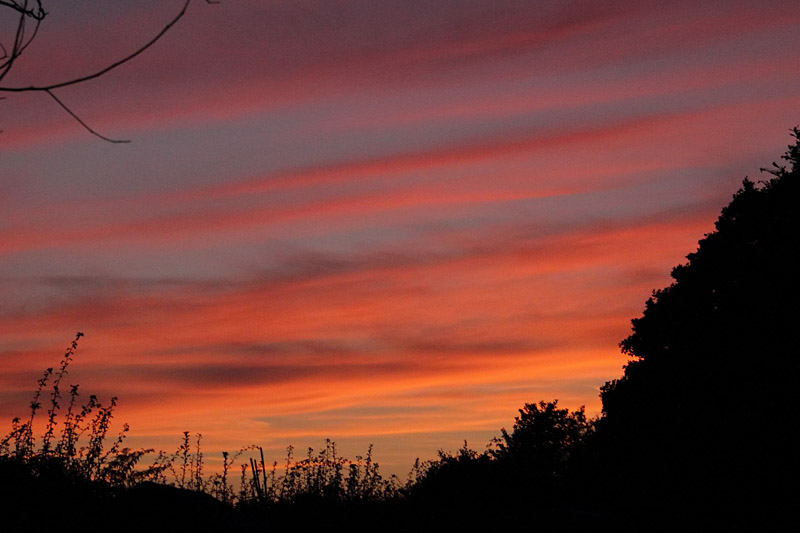 My targets were in Sagittarius (Among others, I wanted to see NGC 6822; I’d seen it from Australia in 1997 but not from the UK. It should be relatively easy at -14 dec) and Aquila but, as it got dark, it became apparent that I wasn’t going to do any observing in Sagittarius, as it was completely murked out, so I switched my attention to Aquila, which was still clear. A bit fell off the equatorial mount at one point, but this didn’t affect its performance.
I did an SQM reading before I began, this was 20.80, which corresponds to a NELM of 6.0.

At this point I took an reading with the borrowed Sky Quality Meter (I must get myself one of these but, like the wide-angle lens, it’s fairly down my list of priorities) and it was 21.02, which equates to 6.1 on the visual scale. Not bad for a pretty average night and confirms my average naked-eye estimates.

Looked for the planetary nebula NGC 6852, also in Aquila, but failed to find it. I don’t have much success with Aquila planetaries! Will try this again next time.

I packed up at 2345 as the Moon was rising and my feet hurt after being on them all day! I only managed three objects – my sessions seem to be like that at the moment thanks to a combination of conditions and having to be at work the following morning.