I live in a reasonably dark area with fairly good, although not great, skies by most standards (certainly UK ones) but there are still some annoying lights to contend with, such as the lights from the couple of neighbours whose houses and gardens border the north of this one. These houses are not that close to us and there is a footpath between the end of their gardens and the side of ours but there is still a significant degree of light trespass from them. One set of neighbours’ lights, in particular, is irritating, simply because they encroach onto my observing space. They have an outside light they put on when they let their dogs out but this, while a bit aggravating, isn’t so bad as it goes off again ten minutes later, but an upstairs window is really annoying because the light is on all evening and they have no curtains at the window, resulting in light spilling across the garden, and the whole place is lit up like Crystal Palace. Yes, I *could* ask them if they wouldn’t mind doing something about the lights but I don’t know these people and I’d feel awkward asking them, they might think I was some sort of crank and tell me to get stuffed. I know some people do approach neighbours but I am not that forward, although I would be if their house was right next to this one and we were being totally blitzed.
The light trespass situation was made worse last week when the hedge, an evergreen one of mixed species, was cut and a foot of foliage was removed from the top and a foot from the side, meaning that the light now comes right through as well as over the top. Needless to say, I was pretty pissed off when I found out what had been done. The hedge belongs to us but my aunt gets a bloke in to cut the hedges and mow the lawn and he took too much off. ‘Well, it’ll grow back’. Yes it will, but not for two or three years and it’s now nearly winter when nothing grows anyway.
To be honest, my observing site is really in the wrong place for light-avoiding but there is nowhere else for it to go and, where it is, I have good views south, west and east. Further down the garden, the house would wipe out the view to the east and south-east.

So, necessity being the mother of invention, I decided to erect some sort of light screen to counteract the lights, although I’d been meaning to do this for some time because there was some light trespass from the house across the way, even before the hedge’s radical hair cut, and the leaves will be off the oak trees soon.
I solicited opinion on Cloudy Nights as to what was the best way to make such a light screen and got a lot of excellent suggestions. Unfortunately these also looked like quite costly suggestions, involving making a frame from a lot of interconnecting plastic water pipes, which I’d have to buy. However my aunt suggested that I used 7ft garden canes and stick them into the hedge, the density of which (despite the cut!) will hold up the canes even with a heavy tarpaulin fixed to them. I shoved four canes through the centre of the hedge and fixed the tarp to them, initially with string, but I will probably get some heavy-duty clips and use those instead because it will be quicker to put up and take down again. I will probably get some black cloth and use that instead of the tarp as it will be lighter to put up and won’t be as noisy as the tarp is.

Without the screen, offending window visible from observing area. 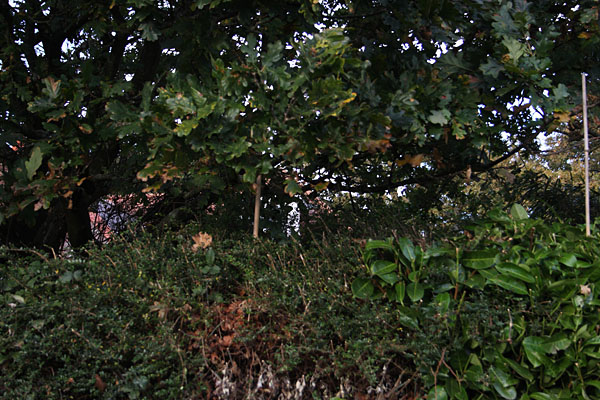 Two of the four canes in place

The tarpaulin in place.

It’s not an ideal solution – that would be me winning the lottery and moving to the Arizona, New Mexico or West Texas deserts, away from neighbours and their stupid overbright and irritating lights, not to mention the crap North Atlantic weather – but it should do the trick. If the neighbours ever notice the light screen – which will be taken down after each session or the following morning – and ask me about it, then I will tell them it is to block out excess light…maybe they’d take the hint.

While I’m in the mood for a moan, why is it that, as soon as the Moon is past last quarter do the effing clouds move back in and the weather turn to crap again?!