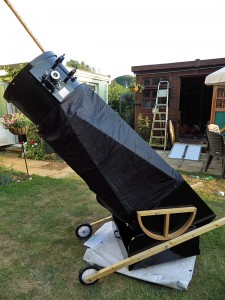 Sandown, Isle of Wight, UK. 50 N This is my current home observing site. It’s actually outside Sandown, in one of the small villages. I use an 18″ Dob here, as well as my 8×42 binoculars and, sometimes, a 3.5″ refractor. Despite light domes from Sandown and, to a lesser extent, Shanklin, it is still dark and the NELM often exceeds 6.0 to 6.5 as any light pollution from Ryde and Newport is hidden by the Downs and next door’s trees (1993-1994 and 2005-present).
Photo, left, shows scope on lower lawn.

VAS Observatory, Watery Lane, Newchurch 50 N This is also quite dark, comparable to home (it’s only a mile away as the owl flies). I don’t observe from here that often as I prefer to observe at home, but during the winter we sometimes hold observing sessions here. Available scopes range from 6 inches to 18 inches. (1998-2004 and 2005-present)

Brighstone Holiday Camp, Military Road 50N This is one of the darkest sites on the Island with a NELM > 6.5. Here VAS holds its yearly Isle of Wight Star Party. (2008-present) 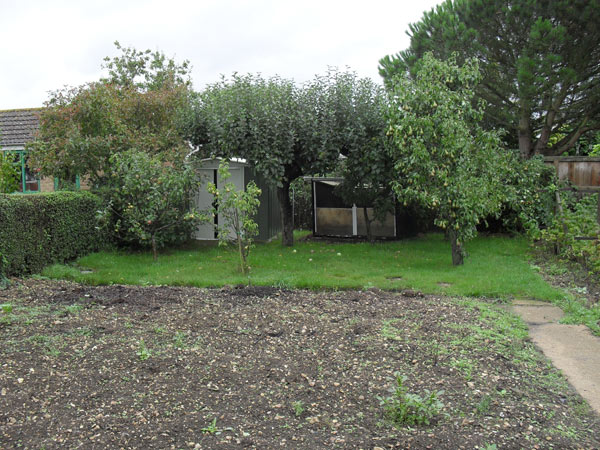 My very first observing site, at my mum’s house. I’d put my scope on what is now the vegetable patch (it wasn’t then), shown centre left. Picture faces east.

Palmers Road, Wootton Bridge, Isle of Wight, 50N (left)This is my mum’s old house (from November 1984 to August 2010, and most of my teenage years were spent there). It’s a mile away from the other Wootton site at Kite Hill and isn’t as good; being further up the hill it is more exposed to light pollution from Southampton, Fawley Oil Refinery, on Southampton Water, Portsmouth, Ryde and Newport and the average limiting magnitude is around 5.5. The photo at left was taken in August 2010, just before the house was sold.
I used this site during the early 1990s when I was living back there for a few months in the early 1990s. (1992-1993)

Kite Hill, Wootton Bridge, Isle of Wight, UK. 50 45N There are two sites, close to each other that I used during the 1990s and into the early 2000s. One, Kite Hill Farm, was where the Vectis Astronomical Society’s 18″ f/4.5 Dobsonian was temporarily kept before being moved to the new VAS Observatory in the late 1990s. The other place was literally just down the road, next to the millpond, where my 8.75″ f/4.5 Newtonian was housed in a dome belonging to a VAS member. The area was reasonably dark back in the 1990s, although I am not sure what it is like now, with NELM of 5.8.

Observing sites used on my travels

Upper Field at the Prude Ranch

Lowrey Observatory, Ft Davis, Texas, USA 30 36 N This is a private observatory, owned and run by Jimi Lowrey and houses a 48″ Dobsonian. It’s even higher than the PR and equally as dark. I was lucky enough to be invited to join Jimi and others for observing with the 48″, on three trips to TSP. And, yes, it’s as awesome as it sounds! (2008, 2010 and 2012).

Warrumbungles Mountain Motel, Coonabarabran, NSW, Australia 31° 16′ 25″ S This site is near the Siding Spring Observatory and, as such, is very dark. It’s also pretty dry with a high percentage of clear nights. The OzSky Star Safari is held here every year. I had a week of great observing here in March-April 2014.

Woolloomooloo, Sydney, NSW, Australia. The less said about this site the better! I did some binocular observing from here in May 2009, after an observing session out at Coonabarabran was a wash out and the night before I flew to Thailand on my way back to the UK after a bird-watching trip to Australia. NELM < 4.0 so, a nice place but no good for observing! (May 2009)

Lobethal, South Australia -35S.  This is at the home of Webb Society member (and current, as of 2010, Southern Sky Secretary) Jenni Kay. The skies are nice and dark with a limiting magnitude of 6.1 in a rural location. Jenni describes this as ‘semi-rural’ but it looked rural enough to me. Here I used a 12.5″ Starsplitter Dobsonian, an 8″ Dynamax SCT and a 10″ Dobsonian. (July 1997)

Ellesmere, Queensland, Australia -26 44 S This is in a very rural area with superb dark skies, down to a naked-eye limiting magnitude of 7.0 – M4 is clearly visible to the unaided eye. The main scope here is a 12.5″ Dall-Kirkham Cassegrain, which is normally set up for CCD work but altered so I could use it for visual observing. (August 1997)

Manly, Queensland, Australia -26S This is in the suburbs of Brisbane, so there’s a fair bit of light. Consequently, the NELM is only around 4.5 to 5.0 at best. The observatory is a run-off shed in the back yard, housing an 8″ Vixen LX200 Cassegrain. (August 1997)

Lions Camp Duckadang, the venue for the Queensland Astrofest

Lions Camp Duckadang, Linville, Queensland -26 S.  This is the site of the annual Queensland Astrofest and is another nice dark rural site. It’s a couple of hours’ drive from Brisbane and has a NELM > 6.5. Here, I used a 20″ f/5 Dobsonian to observe mostly planetary nebulae, as well as the southern ‘lollipops’. (August 1997)

Also observed from various sites in the Australian outback while travelling through the country in 1997. The Aussie outback is incredibly dark and one of the best places on the planet to observe from.