A few posts ago I mentioned that the mirror cell of my home-made Dob was not very good, with the collimation slipping several times in a session. Also the mirror itself – unrelated to the mirror cell problem – has started to oxidise (looking through from the back it is like looking at a starry sky), but, I was told at our society’s weekly get together last night, that’s normal (funny, my old 8.5 inch never had this problem) and it also looks filthy. I washed it a few months ago, but got some instructions on how to try and – carefully! – get more of the crap off it.
Therein lies a lesson: never, ever, let a non-astronomy relative talk/nag you into storing a scope in the bloody garden shed!!! It was the mould that has done some of the damage.

Below is the mirror in its currently grubby state. I have labelled a cat hair, just in case it looks like a scratch – no, the cat has been nowhere near my mirror, but her hairs have a nasty habit of getting everywhere. I will get the mirror recoated sometime, but in the meantime, I have put it in a box in a cupboard until I decide what to do with it. The rest of the scope can go back in the shed! 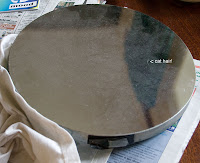 Because the home made 12″ scope is a bit cumbersome and pretty big, plus takes up too much storage space, I have decided to buy an off-the-shelf 12″ Dob, such as a Revelation (made by GSO and sold by Telescope House here in the UK) or Lightbridge (sold by Meade but actually made by GSO). I have heard mixed reports about these, but at £550 for the Revelation, you can’t go too far wrong. Taking into account the mirror cell problem and mirror problem with my current scope, deciding to get something else is not a hard decision and besides a cheap scope will do until I can save up for a 16″ Orion Optics UK Dob.
I also have an 8″ Celestron Newtonian on a Vixen GP mount which I can use in the meantime. However, this scope’s mirror is also in a poor state! I hasten to add that it was like it when I acquired the scope (I was given it a few years ago by someone who no longer wanted the thing). 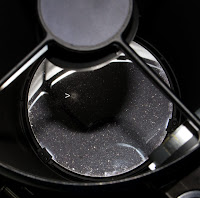 I hope that it won’t be too long before I can get back into observing with a decent-sized scope. I am currently temping (the economic climate is shot to shit and prospects are gloomy at present) and I am hoping that my current short-term contract lasts a few more weeks so I can get my hands on a new Dob.
In the meantime, I will carry on observing with my binoculars and other small instruments. I have a deep sky binocular project on the go at the moment, so it’s not as if I am wasting time.