After a few days of de-cluttering, de-spidering (there were some huge monsters, fortunately mostly deceased, in there. One was curled up dead and I dread to think how big it was when it was alive) and cleaning up, plus a couple of tip runs, I was able to move my 18″ and other stuff into the large wooden shed yesterday. The 18″ is the large object beneath the silver cover, at left. I had to disassemble it to move it safely down the garden. The ramp arrived from Amazon on Tuesday and is perfect for moving the scope in and out of the shed. 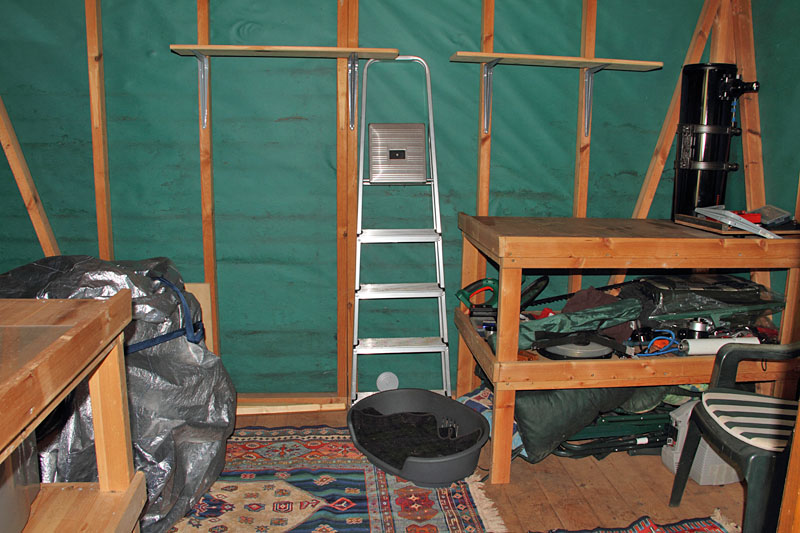 My previous scope storage shed, which is plastic, has now been filled with various bits and pieces for the garden. I noticed this afternoon that the inside walls of it are covered with mould, presumably as a consequence of the dire ‘summer’ we’ve had. Eeek, not good. I have now plucked up the courage to look at my 18’s mirror and, while it is pretty grubby and in need of a wash, it doesn’t appear to have mould on it; the silica gel cat litter in socks placed inside the rocker and mirror boxes seems to have done the trick.

The mirror would always be covered in condensation in the mornings, regardless of having been used or not, during its year (I have had it one year tomorrow) in the plastic shed. Having moved it down to the wooden shed yesterday, I noticed this morning, when I decided to inspect it, that there was no condensation on it at all. A good sign…and this will be far better for the mirror.