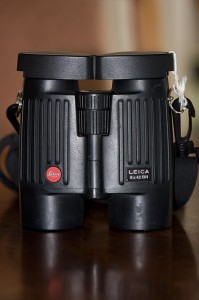 Following on from my little project to observe the Messier objects with a pair of 8×42 binoculars, I decided to go through the Astronomical League’s Deep Sky Binocular list and do that, too. By then, I had a new scope (I’d initially began the binocular Messier list, also an AL program because I was scopeless) but decided it was a fun thing to do on those nights when I was too lazy to get the scope out, or it wasn’t practical for other reasons. I’d also run into a few problems with my new 12 inch scope, so just used the binoculars for a few sessions until I’d got the problems fixed although, even with the telescope repaired, I still had a few binocular sessions now and then.
This project was started on 24th October 2008 and finished on 19th June 2010.

For this project, I used the same pair of Leica 8×42 binoculars I used for the Messier list. Unlike the Messier list, however, I managed to see everything on the Deep Sky list. Inevitably some objects had to wait for better transparency or seeing conditions but there wasn’t anything that eluded me.

It goes to show that binoculars, while widely overlooked, really are quite capable little instruments and brilliant ‘grab and go’ scopes. It is surprising the amount you can see with them, particularly under a fairly dark sky. If you want a quick observing session, or are scopeless for whatever reason – sale, ‘between scopes’, haven’t got a scope yet, etc – don’t forget the binoculars, if you have a pair.

Here are the objects listed in order of observation.

NGC 869 and 884, the Double Cluster in Perseus. Easily visible to the naked eye as an elongated fuzzy patch. Through the binoculars, both clusters are round and partially resolved. 884 is a bit brighter and larger than 869. 869 has two bright stars close together which dominate the cluster.

Stock 2, open cluster in Cassiopeia. Nearby to the Double Cluster, this is a large, loose cluster which is easily resolved.

NGC 663, open cluster in Cassiopeia – Large bright cluster visible as a round haze through the binoculars. Unresolved with direct vision but some stars are resolved with averted vision.

NGC 129, open cluster in Cassiopeia – This is very easy to find, being just about halfway between γ and β Cas. Irregular, granular glow.

Kemble 1 (Kemble’s Cascade), asterism in Camelopardalis – Beautiful chain of 25 to 30 stars in a stream, ending at a bright knot (the open cluster NGC 1502). Right in the middle of the chain is a bright blue-white star.

Collinder 463, open cluster in Cassiopeia – Stuck out ‘in the sticks’, next to a couple of fairly bright stars. It looks like a fat semicircle of fairly faint stars, most of which are resolved. It looks rich through the binocs.

Melotte 20, the Alpha Persei Association – A beautiful region with streams of stars forming an inverted Y or lambda λ shape. Among the streams of stars winds an S shaped loop, which flows between α and δ Persei.

NGC 6910, open cluster in Cygnus – Small knot of stars adjacent to γ Cygni. Telescopically, it’s one of my favourite open clusters but in binoculars it’s not so good. In a rich area of the Milky Way. There are two bright stars close together with a knot of smaller ones.

NGC 7063, open cluster in Cygnus – Very easy to find as it is out by the lower (eastern) wing of Cygnus. With direct vision, it is an irregular roundish misty patch easily seen against the background sky. Detached. With averted vision, about nine members can be seen.

NGC 7789, open cluster in Cassiopeia – Huge cluster just east of β Cas. Large, detached and, while not particularly faint, it can’t be described as bright either. Roundish and nebulous-looking. It looks granular with averted vision but not resolved.

NGC 6940, open cluster in Vulpecula – Huge cluster which looks, through the binoculars, like a detached portion of the Milky Way. Oval shape. Nebulous, with some brighter foreground stars.

NGC 6823, open cluster in Vulpecula – Much more of a challenge than 6940 and another of these ‘one clump among many clumps’ situations. It is near M27 (also easily seen with binoculars) and is an irregular clump of stars. Some mebers resolved.

Collinder 399, asterism in Vulpecula – The Coathanger. Unmistakeable even in binoculars. All 11 stars are easily seen. They’re all bright, six of them are in the bar and five in the hook. The hook contains the brightest stars, two of which are around a magnitude brighter than the others. Observation slightly hindered by jet contrails.

NGC 6709, open cluster in Aquila – Easily found to the south west of ζ and ε Aquilae. Large roundish cluster. hazy with direct vision but some stars resolved with averted vision.

NGC 6934, globular cluster in Aquarius – Not hard to find but not easy to see. A round, fuzzy fat star is how this appears in binoculars.

NGC 6716, open cluster in Sagittarius – Very easy to find, along with neighbouring Cr 394 (not on the list), despite being low in the sky. Large and with some members seen. I think that more would be seen from a more southerly latitude.

IC 4756, open cluster in Serpens – Huge cluster, next to NGC 6633. Irregular. Very large and rich with many stars seen with both direct and averted vision. Very nice indeed.

IC 4665, open cluster in Ophiuchus – Very easy to find. Large, splashy cluster near β Oph. Large and irregular. Many bright stars visible with averted vision and a dozen or so seen with direct vision.

NGC 1647, open cluster in Taurus – Huge cluster. Irregular, not quite round. Lots of stars resolved but unable to count them with hand-held binocs. Brighter stars easily seen plus ‘nebulosity’ hinting at lots of fainter ones in the background.

Melotte 25, the Hyades, open cluster in Taurus – A huge ‘V’ of stars which fits neatly into the 7.4° field of view of the binoculars. Dominated by bright, orange Aldebaran. I counted 60 brighter stars plus many more faint ones within the V. All stars are blue-white, except Aldebaran.

NGC 752, open cluster in Andromeda – Visible as fairly large faint misty patch but the waning gibbous moon is interfering with the observation.

NGC 1342, open cluster in Perseus – Large, irregular misty patch. No stars resolved. I returned to this on a moonless night and had a much better view. Large triangular patch with at least four stars resolved and many more unresolved.

Markarian 6, open cluster in Cassiopeia – Six or seven bright stars in a line, surrounded by fainter ones.

Melotte 15, open cluster in Cassiopeia – Near to Mark 6 this is smaller and fainter. Not resolved. There is a star in the foreground.

Stock 23 (Pazmino’s Cluster), open cluster in Camelopardalis – Small clump of stars. At least 3 are visible with direct vision but hazy appearance hints at many more.

NGC 253, galaxy in Sculptor – A faint elongated glow. Quite low in the sky.

NGC 1807, open cluster in Taurus – Easy to find, at the top tip of Orion’s bow. Oval, dominated by a line of four bright stars plus fainter ones in the background.

NGC 1817, open cluster in Taurus – Right next to 1807, this is the same size but rounder and not as bright, Not bright stars within the cluster.

NGC 1907, open cluster in Auriga – Totally dominated by its vast neighbour M38 this is a small round patch immediately next to and south west of M38. No stars are resolved with direct vision but it does look speckly with averted vision.

NGC 2232, open cluster in Monoceros – Large, sparse-looking cluster. One bright star and five or six other, fainter, ones. The rising Moon is interfering with the observations.

NGC 2244, open cluster in Monoceros – A large, bright cluster which is elongated with ten bright stars visible with direct vision and many more with averted vision. The Rosette Nebula isn’t visible, because the Moon is wiping it out (it’s usually seen relatively easily with the binoculars and UHC filter).

NGC 2251, open cluster in Monoceros – Small and round knot of stars. Patch looks granular but no stars are seen individually.

NGC 2281, open cluster in Auriga – A line of four stars surrounded by unresolved fainter ones.

NGC 2301, open cluster in Monoceros – A faint fuzzy patch which is not well seen.

NGC 2343, open cluster in Monoceros – A small, round clump of stars with none resolved. Quite bright. Detached.

NGC 2527, open cluster in Puppis – Very low and faintly visible as a round patch. No stars resolved.

NGC 2539, open cluster in Puppis – A faint round patch south of M48. Unresolved but it does have a granular appearance when looked at with averted vision.

NGC 2571, open cluster in Puppis – Dim and round. Really too low to be seen properly.

Melotte 111, the Coma Star Cluster, open cluster in Coma Berenices – This vast cluster is easily seen with the unaided eye as a triangular patch between Ursa Major and Leo. Through the binoculars it is a lovely triangular patch of stars with 15 bright ones making up the basic shape of the cluster (an incomplete triangle or a harp), plus may fainter ones in among them. The stars are all blue-white in colour and those bright 15 are all the same magnitude. The southern side of the triangle is incomplete, only half the length of the northern side. The northern side is bent southwards.

NGC 7160, open cluster in Cepheus – Faint round misty patch with no stars resolved.

NGC 7235, open cluster in Cepheus – A small hazy patch with no stars resolved. Easy to find, next to ε Cephei. Averted vision doesn’t improve the view.

NGC 7243, open cluster in Lacerta – A large, irregularly-shaped cluster. Rich-looking and granular with direct vision; averted vision mostly resolves the cluster members. There are at least 15-20 stars but it’s hard to count, due to having to hold the binoculars.

NGC 7209, open cluster in Lacerta – large and round. Rich, Granular with averted vision but with a few brighter (foreground?) stars superimposed. Just a misty patch with direct vision.