Toward the end of May 2011, a supernova appeared in M51 and brightened to magnitude 13 from the 21.8 mag yellow supergiant astronomers suspect it was. M51 has been pretty prolific in the supernova stakes, with exploding stars also appearing there in 1994 and 2005 and it’s thought that this latest one is a Type IIb supernova, where a massive star undergoes sudden core collapse and explodes.
The supernova, designated SN2011dh, was discovered by a French amateur, Amédée Riou, on some CCD images he’d taken and the following night it was visually picked up by an observer, Tom Reiland, in Pennsylvania.

The first reports I saw were on Cloudy Nights on June 3rd. Despite having been an amateur astronomer for the best part of 19 years, I had never before seen a supernova, they’d either been beyond what I could visually see with my scopes or I just hadn’t got round to looking, so, I decided to at least try and see this one, in a bright and quick to locate galaxy.

Conditions weren’t favourable on Wednesday 8th June, as the Moon was at first quarter and with the astronomical twilight we’re stuck with in summer at these latitudes (50 North) it makes the sky brighter than it would otherwise be. However, as M51 is big and bright, as well as easy to locate even in poor conditions, seeing the supernova shouldn’t be too hard. The fact that I had torn a cartilage in my left knee and was having to use crutches to get around didn’t help! So, it was going to be a short session, just to see the supernova, as I didn’t want to wait until my knee had improved or until the Moon was out of the way, in case the supernova fades during that time, although it could be around for longer.

Here’s my observation notes and sketch:

I observed the supernova under less-than-ideal conditions, thanks to first quarter Moon and the all-night astronomical twilight we’re cursed with at this time of year – and I have certainly seen M51 better than this. However, the Milky Way was visible and the transparency and seeing were both good. The supernova was best seen at medium to high magnifications. It wasn’t immediately obvious but after a minute or two with averted vision, popped into view as an extra star. I made the sketch without a photo to guide me and checked it against a photo of the supernova’s position later.
The best views were at 190x and 304x. The view at 507x was terrible, it was just smeared all over the place.

The supernova is arrowed on the sketch. 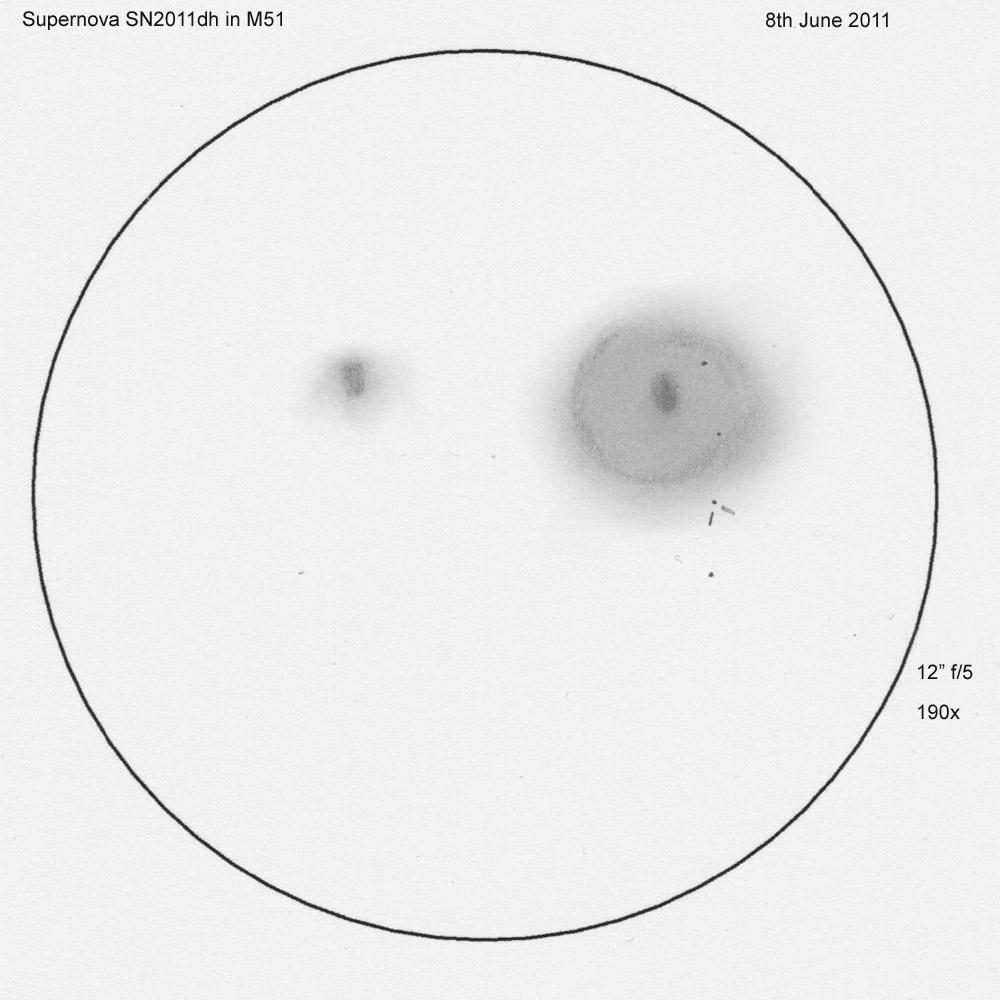 It’s satisfying being able to see such a dramatic event, although if it wasn’t known that the extra star in the view was actually a supernova, it’d be easy to dismiss it as just another star, especially if not familiar with the galaxy and its appearance. M51 is around 26 million light years away, so the star actually exploded 26 million years ago and we are only seeing the results now – if that doesn’t impress you, then you are lacking in imagination!

For more on Supernova SN2011dh visit these links: