I have to say one thing and that is that the 2012 Texas Star Party was, for me, almost a complete blur. It was over *that* fast. It was, however, extremely clear – if very cold, with night time temperatures down in the 30s to 40s F – and TSP-attendees of many years’ standing, such as Larry Mitchell and Barbara Wilson, said that it was one of the best ever for observing and the best in nearly 20 years.
There will be a few sketches once I have scanned them in, which will probably be sometime this week.

Monday 16th April: We, that is Robert Reeves and I, drove out to the Prude Ranch arriving just after lunch. After registration and checking in at the ranch office we drove to the Upper Field and set up the “Jordan-Reeves Mobile Observatory”, a large tent where we would store our equipment – including a 10″ Orion SkyQuest dob I had borrowed from San Antonio Astronomical Association for the week. We were staying off-site, a few miles away at a place belonging to John and Nancy-Jean, friends of Bob and Mary, out on US 166, which forms the Scenic Loop, eventually joining US 118 north west of McDonald Observatory.

Once the tent was set up we made our way to the ‘Consulate’ for ‘Happy Hour’. The Consulate is actually the room where fellow Brits Keith and Jan Venables, regular TSP-goers, were staying and, every year, they invite friends round for drinks, usually between 4 and 5pm. By the time it is dark enough for observing any effects of alcohol have long since worn off. The Consulate also has a small outpost, a tent on the Middle Field, where a British Union Flag is usually to be seen. 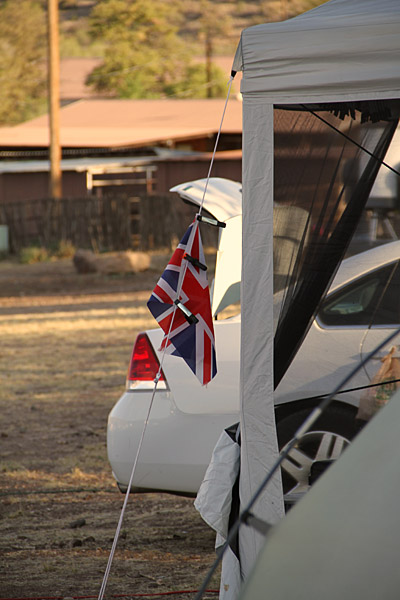 Outpost of the ‘Consulate’

Keith and Jan were this year sharing a large self-catering motel room with Steve and Amelia Goldberg, and this had a beautiful view of the mountain to the north of the ranch. 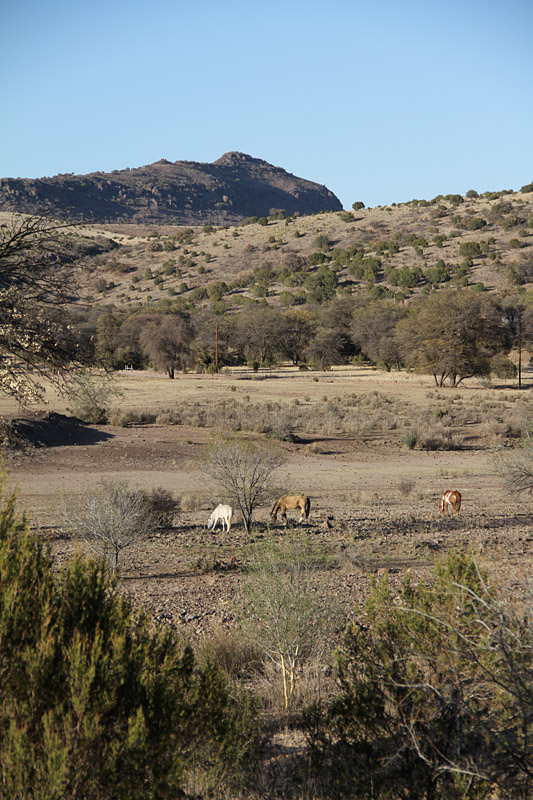 As dusk approached, we set up and waited for it to get dark. Unfortunately an inner-ear problem that I have had on and off over the years inconveniently chose this moment to make an appearance…as it got dark I looked up at the zenith and the sky and the field began to spin. Not good. Larry Mitchell had invited me over to observe with his 36″ Obsession but after a couple of trips up and down that ladder, I felt that there was no way I could safely observe with that scope. So I went back to my 10″ and it was a case of observe..lie down…observe…lie down…observe…quit for the night about 0100, because just looking into the eyepiece made it worse, although I felt better by 0500 and did some observing for the last hour-and-a-half before it got light. Annoying, but there you are. I found that Dramamine (the non-drowsy formula) is good at stopping the worst of the symptoms of inner-ear trouble.

Tuesday 17 April: We got back to the Ranch in the early afternoon via milk shakes and cheeseburgers at the Drug Store (this is an important part of the Texas Star Party!), Bob and I met up with friends Len Philpott, Alvin Huey, Darrell Lee and Darrell’s friend Dave, who had driven across with him from California. Alvin is also from California but opted to fly to El Paso as he had to be back in Sacramento on Friday night.

I had an invite from Alvin and Jimi Lowrey to come up to Jimi’s place and use the 48″ that night. Luckily the worst of the labyrinthitis was over by then and the mild symptoms left were squashed with Dramamine, so I had no problems either climbing the collossal ladder or looking into the eyepiece. We were joined by Scott Ewart of TeleVue who is a good observer himself. 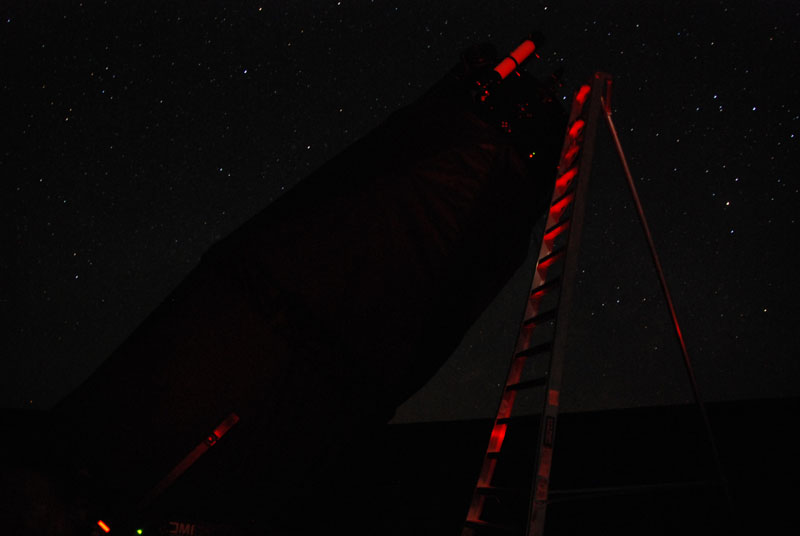 We looked at various objects, ranging from the very bright eye candy, to the dim and exotic. We began with M42. Previously I had only seen this with a 20″, so seeing it with something over twice as large and with more than five times the light gathering power was as spectacular as expected. M42 was incredibly detailed, with wisps, tendrils and dark areas, showed colour (green, blue and some pink) and, for a few minutes afterwards, I could see the Trapezium area still burned on my retina.

We moved on to NGC 2371-2, a bi-lobed planetary in Gemini. I had previously observed this a few years ago with my old 12″ and, then, I could see it as two touching ovals. With the giant scope, not only were the lobes seen but also parts of a shell on each side, giving the object the appearance of a TIE-fighter from Star Wars. Very cool. I rather wish I’d drawn it now.
NGC 2392, the Eskimo Nebula (also known as the Clown Face Nebula if you must give it a whimsical name but want to remain politically correct; but, as I loathe clowns, I’ll stick with Eskimo or plain old NGC 2392!) was nearby so we dropped in on that. The details were obvious, not least the furry parka-looking outer edges and the ‘face’, with a dark area in the ‘chin’.
Moving on, we looked at our friend NGC 3242, the Ghost of Jupiter, another planetary nebula, this time  in Hydra. I have observed this object on each of the 4 occasions I’ve observed with the 48″, the three of us are very fond of this nebula.

Eye candy done, it was time to move on to Serious Observing. We began with Abell 34 in Hydra. Not just to look at the PNe itself but some galaxies within. One such is MAC 0945-1310, which is comparatively large and bright (in a 48″!) and which has a small, uncatalogued companion nearby – ‘Faith’s Object’ as Jimi called it. LOL, that would be nice but I don’t think it’ll catch on.

Moving on, we next went to Arp 243 in Cancer. This is an interesting pecular galaxy, maybe the result of a collision or near encounter. It has two loose arms, which are ‘opened out’ from the centre. One arm points east, the other west.

Hanny’s Voorwerp, which is adjacent to the galaxy IC 2497 in UMi, was also on the list, well my list at least. I was hoping I would get a chance to look at this object, which had previously been seen by Alvin, Jimi, Jim Chandler, Gary Myers, James Mulherin and Dragan Nikin with the 48″, so I persuaded Jimi to turn the big scope towards it. I saw it but it was by no means easy, a faint, slightly elongated patch popping in and out of view. 488x + Sloan G filter. More on the Voorwerp here.

We did look at some other objects, but I have misplaced some of my notes, I’ll pick Alvin’s brains at some point.

Back to some eye candy…NGC 5128 and NCG 5139, better known respectively as Centaurus A and Omega Centauri – both of these I have observed from the US before, as well as from Australia, but never with such a vast instrument as a 48″ reflector.

NGC 5128/Centaurus A /Arp 153 – Totally spectacular, a huge elliptical galaxy with a large and detailed dust lane bisecting it. The western side of the galaxy is brighter. The dust lane has bright areas within it, as well as some stars involved. The northern half of the galaxy is flatter than the southern half. 287x

NGC 5139/Omega Centauri – Vast and spectacular. I had to look at this with my left, non-observing eye as I didn’t want to ruin my dark adaptation! The cluster is totally resolved to the centre and looks almost 3D. The footprint feature I have seen in smaller scopes was obvious. There are chains of stars in all directions and there was almost an effect of being able to see through the cluster. Yes, 48 inches of aperture is overkill on such a bright object but what a view! 287x

We packed in at around 0330 as the wind had got up, making the 48″ difficult to use and putting pressure on its tracking system. We went back down to Jimi’s house – Scott went back to the ranch but, not wanting to hang about in a cold tent while waiting for Robert to finish his photographic exposures, I decided to stay on Jimi’s couch. I sent a message back for Bob with Scott, saying I was staying at Jimi’s and that I would meet him on the ranch later in the day, but Scott failed to give it to him! He duly appeared at Jimi’s later that morning looking for me – thanks Bob!

Sketches of the objects will follow once I have scanned them.

To be continued…Click here for Part 2