This is an updated, and largely re-written, version of an article which I wrote a long time ago (around 2001) and was published in the Webb Deep Sky Society’s Deep Sky Observer #139.

Telescope size is subjective but, as far as I am concerned, a small scope is anything of 8″ and under, medium-sized scopes are 10″ to 16″, large scopes are 18″ to 24″ and very large is 24″ to 30″. Some people have huge dobs of 30″ and above but these are truly exceptional, especially here in Europe. It used to be said, and still is in some quarters, that a 12″ is the smallest of the big scopes but, as scopes are growing ever larger (particularly in the United States) how true this still is, I don’t know. I do know however that a 12″ is the largest solid-tube dob it is possible to handle.

‘Aperture fever’ is a term you’ll read and hear a lot if you hang round internet astronomy forums, star parties or club meetings. It’s a term amateurs use to describe the often overwhelming desire for a larger telescope and it can be debilitating in that your own scope suddenly becomes totally inadequate and observing sessions become marked by feelings of  ‘If only I had a bigger scope I’d see more…’ – not fun at all! The only known cures for aperture fever are cost, inconvenience – the bigger the scope, the more expensive it is and they more awkward it is to store and transport – or giving in to it and getting a larger scope. Very few people are immune to aperture fever and I am no exception – I’ve already caved in and ordered an 18″, despite using a 12″ for three years. If you want to avoid aperture fever, stay away from star parties and internet astronomy message boards!
Nearly everyone starts out in astronomy with a modest instrument, such as a 6″ or 8″ telescope or even smaller, unless they are one of these people who just has to have a bigger scope than everyone else – I don’t think it’s a good idea to start out with something like a 14″ or larger scope; after all, you wouldn’t learn to drive in a Ferrari or a large truck, would you? Some go on to use larger scopes while others stick with smaller ones for their entire observing lives – some people even have ‘reverse aperture fever’ and go smaller rather than bigger, but this is very rare. For many years, between 1994 and 2008 (two observing hiatuses in 1999/2000 and 2004/5 aside), I used an 8.75″ Newtonian – my own one before I had to sell it in 2003 due to lack of funds, then its identical twin which belongs to the local astronomy society – and, with it, I observed hundreds of deep sky objects before moving on to a 12″ dobsonian and, eventually, an 18″.

I’m not going to tell anyone that they shouldn’t buy bigger scopes (and I wouldn’t be one to talk in any case!) because, when it comes down to it, aperture rules and you *will* see more with an 18″ than you will with an 8″, 10″ or a 12″ although it depends on your circumstances, as a 12″ under dark skies will outperform a 16″ under light polluted ones. But, the general rule is the bigger the better for those faint fuzzies. However, you can still see a lot with a smaller scope as I discovered during my time with my 8.75″ and I still use an 8″ dobsonian for those times when it isn’t worth taking the big telescope out or when I just can’t be bothered.

The observing site I used for most of the observations:
I had been using my 8.75 inch f 4.5 equatorially mounted Newtonian from a darkish site in the north of the Isle of Wight, England, for a number of years until selling it in summer 2003. The limiting magnitude is, typically, around 5.5, so there are worse sites to be had, although it is not perfect. There is some light pollution (but mostly shielded by trees) from the cities of Southampton and Portsmouth which lie to the north of the Island, and from the village where the site is located, as well as from a local ladfill site a couple of miles to the south.

I have also included three observations from my trip to Australia in 1997, about the only time I used a small telescope while there!

I observed all types of deep sky objects with the 8.75”, from the bright Messier objects, to some of the not-quite-so-obvious NGC objects and I have included two or more examples of each. All observations were made with the 8.75 inch (22 cm) Newtonian, unless otherwise stated. This is just a tiny selection of objects available to the user of a small to medium telescope. 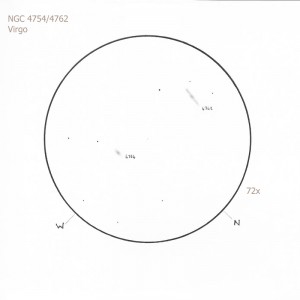 NGC 2903, Leo. 36x: This galaxy appears as a needle of light, elongated roughly north-south and with a bright nucleus. 72x: A superb edge-on spiral with uniform brightness, but brightening towards the centre to form the bright nucleus.

NGC 3166/3169, Sextans. 36x: Both galaxies are oval and have bright nuclei, but apart from that I could see no other detail.

NGC 4565, Com. 72x: This edge on spiral is a stunning sight, looking like a needle of light at low power. It is elongated NW to SE, and has a bright nucleus.
180x: Saw the dust lane. Large and bright.

NGC 6618 (M17), Sgr. Without the broadband nebula filter, only the bar part and the neck of the swan shape were visible, and not very bright. When the filter was added, a lot more appeared. There were filaments of nebulosity around the basic “swan” shape. The complete “omega” shape (from where the object gets its alternative name of Omega Nebula) was not seen.

NGC 6523 (M8), Sgr. Fantastic views, both with and without the nebula filter, were had. The nebula is very bright, and the dark lane in the middle stands out very well.

NGC 6960, Cyg. Another part of the Veil supernova remnant. Seen only with the broadband nebula filter. Faint glow NE-SW.

NGC 4361, Crv. 36x: Visible as circular smudge.
72x: The PN is well defined. Not over bright, but stands out well against the background sky and is roughly circular in shape.
180x: Though I saw a central star, but this could have been a superimposed foreground star (later checked against Lee MacDonald’s observation in the Webb Society OSR No 16 – he also saw this star with same size scope and 90x magnification, so it may well have been the central star).

NGC 6826, Cyg. This PN proved pretty elusive, and took half an hour to find. At 72x it shows an icy blue colour. It is small, round, bright and well defined with a brighter spot in the middle. With direct vision the PN disappears leaving the central star. There is no gap around the central star. 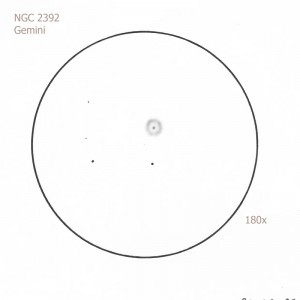 NGC 2392, Gem. 36x: Obviously non-stellar and looks like a circular bright smudge.
72x: Very bright, despite being low over the lights of the village. Well defined and brighter in the middle.
180x: Appearance of outer shell is furry and there appears to be a dark ring around the central star.

NGC 3587 (M97), UMa. 50x: Also known as the Owl Nebula, this PN is located near M108 and ß Ursa Majoris and is extremely faint – hardly brighter than the background sky – appearing as a circular ill-defined smudge. A broadband nebula filter made no difference. I did not see the eyes that give the Owl Nebula its’ name, although I looked for them.

NGC 4755, Crux. A pretty, small o.c. made up mostly of blue stars, but with a conspicuous red one at the centre. It is shaped like a capital “A”. The red star is on the bar of the “A”. This observation was made with an 8 inch Schmidt-Cassegrain telescope at a magnification of 70x under the dark skies of the Australian Outback, near Alice Springs. If you ever get the opportunity to go there, take it. The skies are wonderful, and alone are worth the air fare.

NGC 6124, Sco. Moon nearly at first quarter. This is a pretty large o.c. It is an irregular circle of stars around a grouping of stars in the middle. Most of the stars are of similar brightness, but some are fainter. The stars are more concentrated towards the centre of the cluster, and it is easily distinguishable from the background stars. It is not that bright, but is easily visible as a faint haze in the 6×30 finder. 8 inch Cassegrain at 72x.

NGC 6910, Cyg. This o.c. is located ½º north of Gamma Cygni. It is shaped like a branch, or letter “y”. It is mostly made up of magnitude 12 stars with two yellow/orange mag. 9 stars next to it. This is a personal favourite of mine. 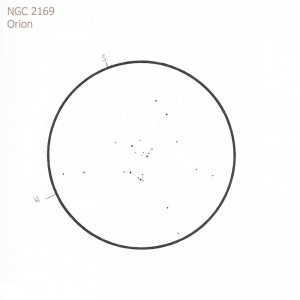 NGC 2169, Ori. This is a sparse collection of 15 or 16 stars broken into two groups with no stars in the middle. The cluster is shaped like the number 37. The 7 component (to the north) has five or six stars while the 3 component, to the south, has seven. There are four brighter stars, white in colour, while the rest are at least a magnitude fainter. At least one star is fainter still. The cluster is 5’.

NGC 6397, Ara. This is visible in the 8×50 finder. 84x: pretty bright with outer stars resolved. There is a scattering of stars in a chain to the east. The cluster is brighter towards the centre. The centre is not resolved, but shows slight granular texture. With averted vision can see many of the globular’s stars superimposed on unresolved centre.
168x: Centre still not fully resolved, but appears denser; cluster moderately concentrated. Observation made with 8” SCT from Australia.

More recently, I have also made some observations and sketches with a very small, cheap, 3.5″ refractor: 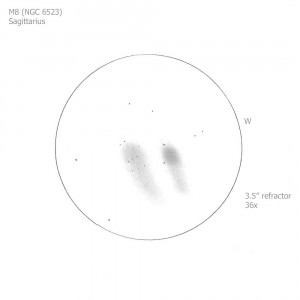 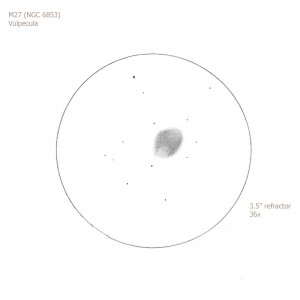 Keep persevering, and you will be rewarded with some fine sights, even in smaller scopes. Apart from the objects which you will have no chance of seeing, like some of the more obscure galaxy clusters, have a go at finding everything and anything. If you don’t see it, try a different night when the conditions may be better (and when the moon is out of the way), and away from artificial light.
A good nebula filter, like an Oxygen III, or a UHC is pretty much essential (but they don’t work on galaxies, open or globular clusters or reflection nebulae) as are a good finder scope and decent star charts.