In 1994, Canadian astronomer Paul Hickson published his Atlas of Compact Groups of Galaxies and it didn’t take long for these to become favourite targets of serious deep sky observers with access to moderate or large telescopes. There are 100 Hickson galaxy groups, which range from quite bright ‘eye candy’ (Hickson 44) to faint and challenging (Hickson 50). Like many amateurs before me, I have embarked on a project to see as many of these as possible. I got a head start during my visits to the Texas Star Party, where I had access to huge telescopes in the 30″ to 36″ range, but I have also seen some from my reasonably dark back garden here at home, using my 12″ f/5 and 18″ f/4.5 dobs.

I haven’t observed very many of these to date, but I plan to update this page with observations and sketches as I make them. By the end of the summer (2011), I will have an 18″ f/4.5 scope, which will be an improvement over my current 12″ f/5 when it comes to hunting down and seeing faint objects, and a fair few of the Hicksons are quite faint, or at least their component galaxies are.

For all sketches, click for a larger version. Where I don’t have a sketch, I’ve included a MegaStar generated chart of the group. 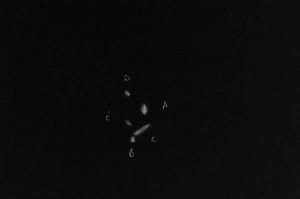 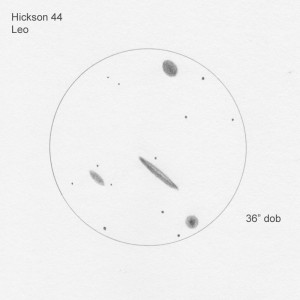 Hickson 44 – sketch made at the 2008 TSP. Description, above, was an observation made from home. 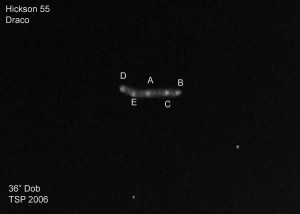 Hickson 55 – Using Larry Mitchell’s 36 inch dob at the 2006 TSP, I had a good look at these. They were faint but obvious. The galaxies showed up as an uneven chain of 5 tiny nuclei surrounded by a faint halo. 36” f/5 dob, magnification unknown. 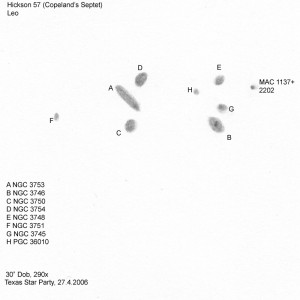 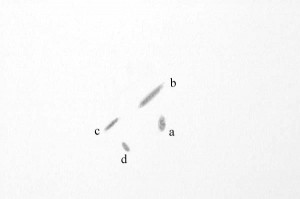 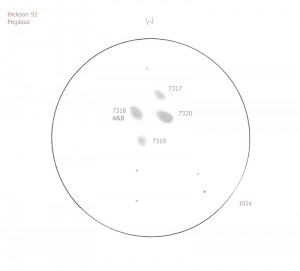