I managed to photograph PANSTARRS this evening. This comet is not a naked eye object but is easily seen with 8×42 binoculars low down in the western sky about an hour after sunset.

I was quite pleased with these shots – especially as they were the only two in focus! 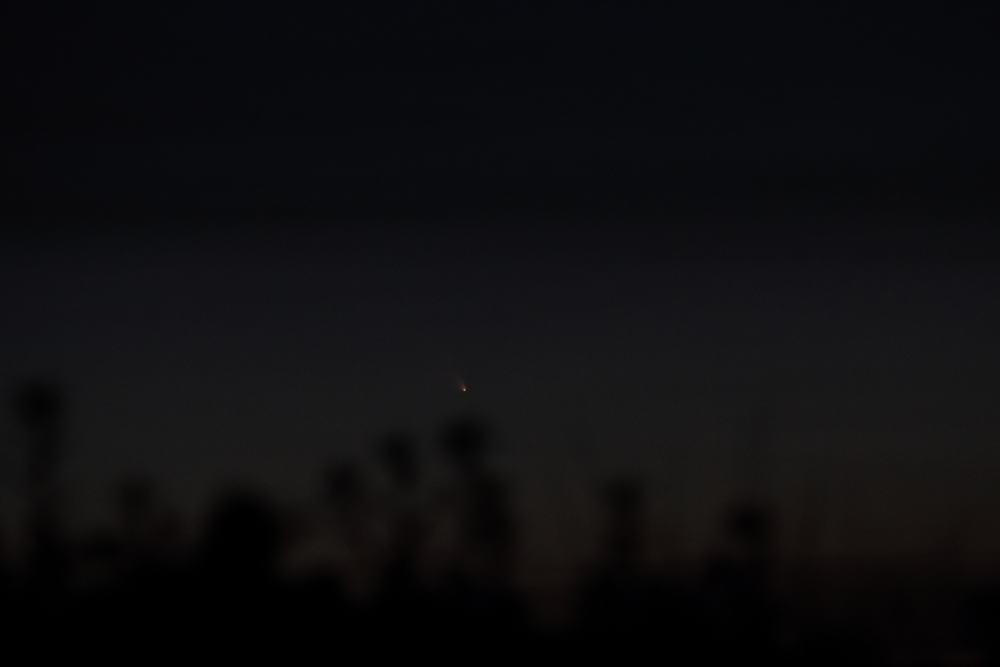 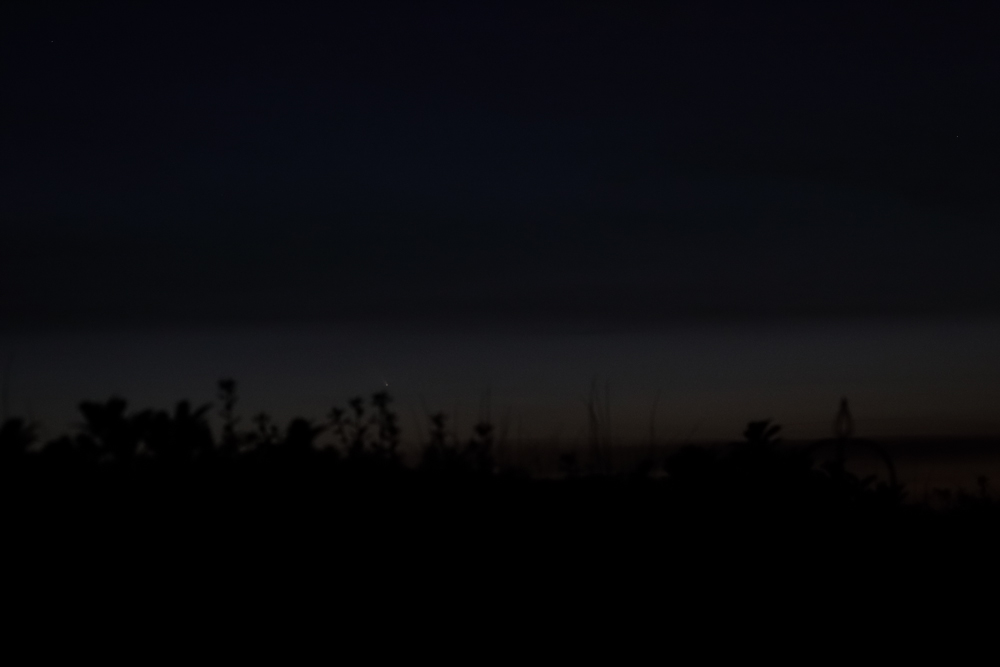 It was a lovely clear night last night, typical when you can’t make full use of it. Serious deep sky observing was right out of the question because I can’t set up or use my 8″ or 12″ scopes, so I decided to compromise, hobble outside and sit on a garden chair to view Comet Garradd, currently in Sagitta, instead with my 8×42 binoculars. As it turned out, the comet wasn’t visible with the binocs, so I got my aunt to bring out my little Vixen refractor, camera tripod and eyepieces.

The comet was easily visible with the little refractor at 17x. It was a very pale greenish-white, not quite round and brighter towards the middle. It was around magnitude 7-8. I compared it to the globular cluster M71 and there was not a lot of difference in brightness.
I didn’t do a sketch because, with my foot in plaster and being on crutches, things are just too much hassle at the moment, and a sketch was just one more thing to do.

A detailed finder chart for C/2009 P1 (Garradd) can be found at the Skyhound website. In the meantime, here’s a Megastar chart with Comet Garradd’s position as of 28 August 2011 indicated by the red arrow. I removed all the DSOs (not that Sagitta is particularly blessed with lots of DSOs) except M71, which I left in for comparison.

It’s slightly murkier tonight with clouds moving in, so I decided to just go out with the binoculars and track down the latest comet to grace our skies, Comet 103P/Hartley 2. I have a big soft spot for comets because they look like deep sky objects but are transient, and only visit us for a short time. Comets can go either way, they can either be big and bright and even Joe and Jane Public are aware of their presence or they can be tiny, small, faint and elusive. As comet hunter and deep sky observer David Levy once said ‘Comets are like cats. They have tails and do precisely what they want’, indeed comets that have been predicted to be bright have been disappointing and vice versa. Sometimes comets that have been predicted to be big and bright have been just that but, comets often prove astronomers wrong!

103P/Hartley 2 is not bright but it is big. It’s also obvious in a pair of 8×42 binoculars and I found it quite easily where it presently lies in Perseus. It’s heading towards Auriga and is supposed to brighten by the end of the month but, as is usual, the Moon will interfere.
In the binoculars it was large – much larger than I expected, ever so slightly elongated, diffuse and with a brighter core. It also looks quite green.

I took a couple of photos of the comet, and have indicated it with an arrow pointing towards it. The photos illustrate not only the comet but also why I am not an astrophotographer – they are not the best! They were taken with my Canon 40D and a 70-200mm lens at f4. Click for enlargements. 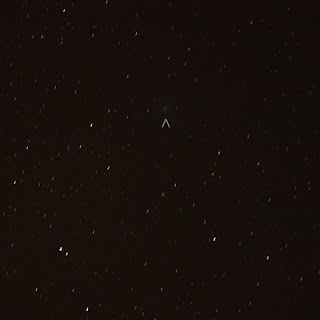 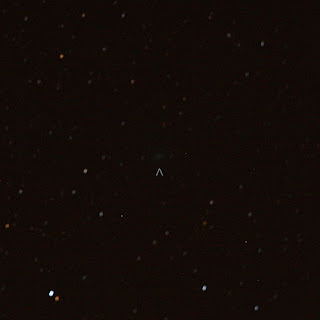 England v Algeria in the World Cup is on ITV1 and the match is so good, I am typing this. Yes, it is terrible and England are embarrassingly woeful. It’s a pity that assistant coach David Beckham can’t go on, even in his nicely cut suit he’d play better than this lot. In fact my grandmother would do better than Rooney et al, and she’s been dead for nine years.

I did manage to get out and observe Comet C/2009 R1 McNaught the other night, I set my alarm for 0200 and was actually able to get out of bed to do so. I can’t usually get up early to go observing, but as this comet is only around for a short while, I made myself get up. I had to walk up the footpath in front of the house to get clear of the trees blocking the view of Perseus (which is why I used my 8×42 binoculars and not a telescope) which the comet is currently passing through. It took me a while to see it as the sky was not that dark (it is June at 50 degrees north, after all), there was a lot of murk in the sky and, hence, a lot of skyglow. The comet was faint and round and I could not see the tail.

My car passed its MOT with no problems today, although yesterday I noticed a judder in the clutch. However this type of electronically-controlled manual gearbox called a ‘Sensodrive’ is known for clutch judder, so I am hoping it is not a problem. Anyway, the car not needing anything done to it means I can begin saving for the 18″ Dob I want to get. I have two months worth of work starting on the 24th, although it won’t be anywhere near enough to save up all the nearly £3000 needed, it’ll be a start. Providing work keeps coming I should be able to save the money in 6-7 months.
I had been doing a separate blog for the Herschel 400 project, but I have decided to bin it and just put the posts here, after all I am duplicating 99% of the stuff and that’s pretty pointless, so I am just going to keep it all on this one.

Back in November, I was in Ecuador, in the western Andes, and during a rare clear night I saw and sketched Comet Holmes which was bright and large in Perseus at the time. When I first saw it I knew it was a comet, there being no deep sky objects quite that big and bright in that area, but not which one and next time I was in Quito I went onto the net and found out the name and designation. During the time it was visible, Holmes brightened by a factor of 1 million and put on a spectacular show.
I made a rudimentary sketch, reproduced below (click on picture for larger version). The observation was made with the naked eye and my 8×42 binoculars.

I also saw Holmes from the Amazon jungle. From both the jungle and the mountains, with no light pollution it was spectacular. I didn’t get back to the UK until late December and subsequently got no further opportunity to look at this comet.