Long time no speak. The last two-and-a-half years have been very bad for astronomy or, more specifically, my involvement with it. I have done next to no observing – apart from a trip to Australia to attend OzSky 2016 in April this year, of which more in due course – and this has been nothing to do with the weather.

Back in August 2013, I was sent by a local employment agency to work in a local factory making wood-burning stoves. I didn’t want the job because it was badly paid, in awful conditions and well below my skills, but I agreed to go because, quite frankly, the recession had put paid to the normal computing/admin work I do and I needed the money.

To cut a long story short, the work, while just 4 days a week, consisted of 0700 starts and 1730 finishes with a paltry 30 minutes for lunch. Added to which, it was physical work so that meant that any thoughts of astronomy, even at weekends, wasn’t appealing and, not only that, I developed a bad upper back problem and severe tennis elbow both of which were directly related to the factory work I was doing. I spent the entire 2.5 years looking for another job, without success but, by Christmas 2015, I finally had enough and I handed my notice in after the Christmas break on 4th January 2016. My mum had died on New Years Day after a series of illnesses related to COPD and I decided that life was too short to be stuck doing something you hate.
Luckily I had saved up enough money to pay for a trip to OzSky 2016, so I went to Australia for 2 weeks and spent one of those weeks doing the only observing I had done for a good couple of years!

Fortunately I now have a much better job, in IT admin for a large US-German company, although whether the UK EU Leave campaign winning the referendum (unfortunately) will have affected this, only time will tell…the political shit has already hit the fan, despite the referendum actually being non-binding, so it’s probably only a matter of time until the arse falls out of the economy (again). We’ll probably end up scrabbling around for a few quid while our political ‘masters’ continue to stab each other in the back in a never-ending quest for power and to line their own pockets, all against a backdrop of cries of ‘We’re free!’ (from what exactly? We are hardly oppressed by the EU) and ‘We have got our country back!” (again, how exactly?) from the leave camp.

Rants over, is this preamble actually leading up to anything you ask? Apart from attempting to explain to my one remaining reader why I had apparently vanished off the face of the planet this past couple of years. Well, yes. This – my back and arm problems mean I can’t easily use my 18″ so, while I’ll keep it for spring/autumn galaxy observing (I have no immediate need to sell it) I am now planning on going back to a 12″ scope and I have my eye on an Explore Scientific Ultra Light 12″. I wanted to get a dob with some form of locating system but these were too expensive, so if I get one without, I should be able to fit my Argo Navis DSCs to it.

The weather recently has been clear, but murky, and last night was no exception. I went to our local society’s observatory last night (every Thursday is the open evening and we usually get a mix of members and sometimes interested members of the public) and we took out some scopes, including a 10″ Orion Intelliscope.
Unfortunately the mist and murk were worse than the previous night and we only were able to look at the brightest Messiers. Galaxies, as expected, were worst hit and even normally good Messier galaxies were almost obliterated. We did look at M105, NGC 3384, M65 and M66 (NGC 3628, one of the Leo Triplet with M65 and 66, was utterly wiped out by the murk), M81, M82, open clusters M93 and M46 (not a bad view despite their low altitude in Puppis and the misty conditions), perennial faves M42 and M43, plus the attractive blue and yellow double star Iota Cancri and, later when it rose, Saturn, whose rings have opened up since I last saw it.

I have never used an Intelliscope before. The concept is similar to the Argo Navis system, a digital setting circle. You enter your wanted Messier or NGC number, the display shows some numbers, which are how far you need to push the scope in altitude and azimuth to get to where you are going, along with arrows showing which direction you need to push the scope. The numbers get lower the nearer you are and when you arrive at the location the display will read 0<>0 0<>0. The society’s Intelliscope was a little off, with the objects being just out of the field of view, but not by much. It’s a neat system and I’d like a similar thing for my scope, maybe an Argo Navis, one day.

Despite the crap conditions it was a nice evening and we also spent the time putting the world to rights as well as observing. It was disappointing though, that only a handful of us were outside, with most people choosing to sit inside the building and chat. It’s an astronomy society, so it would be nice if everyone was outside but that seems to be the difference betwen UK and US amateurs. Over there, it seems to be a more vibrant and active scene.

The evening started off clear so I set the 12-inch up on the patio. After letting it cool down for a while, I aimed it at some bright stars in a rapidly-worsening sky (isn’t that just typical??) and M81/M82. The collimation could do with a bit of slight adjusting but the view, despite the crap sky, was pretty good and I tried out a selection of eyepieces on it. Sadly, I had to pack up after only half an hour because the sky was becoming increasingly opaque. Annoying, but hopefully we’ll get some nice clear nights soon, once Spring gets well underway, and I can test it properly. Anyway, I’m pleased with what I have seen so far. 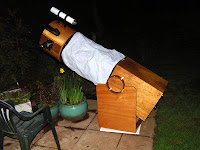 I have sent off for a laser collimator from Telescope House, a cheapish one at £34.99, so hopefully that will make collimating the scope easier and quicker. This is the first large Dob I’ve owned so keeping the mirrors aligned properly will be more of an issue.

I went and collected the 12-inch Dob this afternoon and it’s just as well I didn’t get a 14″ or larger or a longer f-ratio mirror or it never would have fit into my car, and I wouldn’t have been able to carry it – the 12″ is quite heavy, but I can (fortunately) lift it comfortably. On getting it home, my aunt started fussing slightly over the size of the thing: ‘Big enough, innit?’ and ‘Where are you going to put that?’ (I don’t think she quite grasped the size of a 12″ Dob until she actually saw it!).

Here are a few photos: 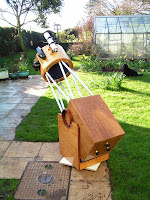 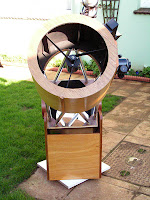 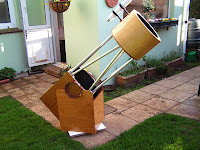 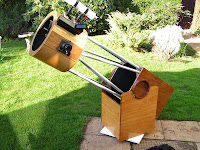 It fits neatly into the corner of my room: 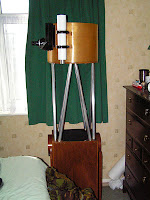 Looking down the tube: 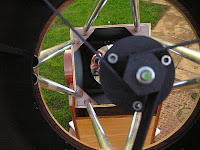 It was made with a 2-inch focusser but this can be adapted for 1 1/4-inch eyepieces, such as all mine are until I replace one or two with 2-inch versions (2-inch is the upper picture, 1 1/4-inch is the lower pic): 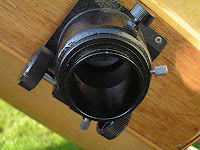 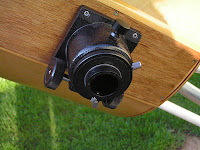 I am hoping for a clear night tonight so I can see how well (or not!) it works. Richard said that it focusses, but a bit further along the focus (it racks almost right in) than he’d like, so if that is a problem with some eyepieces, the mirror would need to be raised.

My 12-inch Dob is now finished and I should be able to collect it at the weekend. I now hoping the weather will co-operate and I do not get a case of the ‘new equipment = cloudy weather for weeks’ curse.