Only a one-hour session due to tiredness and light skies. The objects are all globular clusters, except where stated.

NGC 6535, Ophiuchus – Smaller than M14 and quite faint against a not-quite-dark sky. At 219x it’s a roundish glow with some foreground stars superimposed on it. Slightly granular but mostly nebulous.

NGC 6517, Ophiuchus – Fairly small but easy to find. Quite bright but not helped by light summer sky and low altitude. At 90x, it is a round glow with a slightly brighter centre. At 165x it shows a brighter dense core and some granulation. No real improvement at 219x.

NGC 6426, Ophiuchus – Very easy to find, because it is located between ϒ and ß Ophiuchi, and is a round glow which is not resolved at 90x although it does have a vaguely granular appearance. It doesn’t brighten towards the core.
Granular at 165x but no improvement at higher powers.

NGC 6712, Scutum – Large, partly resolved with many stars on a nebulous background. Not concentrated towards the core. 90x, 165x.

NGC 6664, Scutum – Open cluster. Large, loose group of approx. 30 stars in NW-SE line. Mostly white stars of equal brightness but there are fainter ones scattered in between these. Located 1° from α Scuti.

Today (10th July) I did some solar observing, as usual, and encountered an unforeseen hazard of day time astronomy – a bird shit on my notebook! Better than on me, I suppose but clothes and hair can at least be washed! 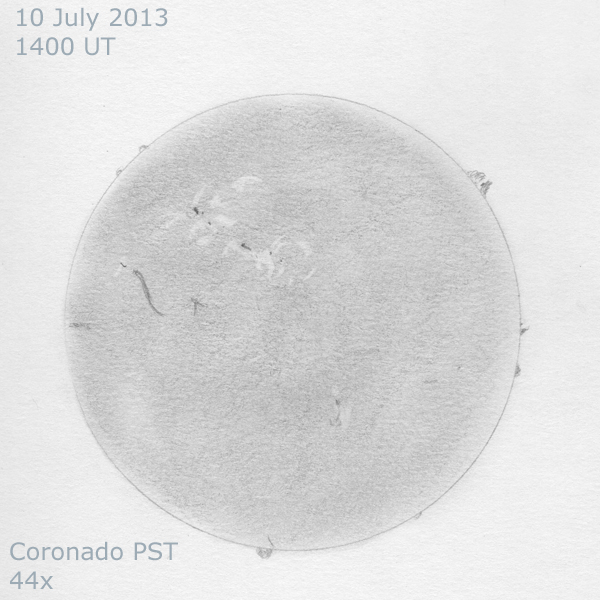