The 18 inch finally got its first look at the sky, as it cleared just before sunset after a day of thundery showers, some of which were torrential. The forecast called for a clear night so I hoped to get at least an hour in. I put the scope together, which at least is getting easier and waited – impatiently it has to be said! – for darkness. Collimation was a breeze as, despite the scope being loaded into a van, driven along 200 miles of motorway network, carried on a ship across a bumpy Solent, driven across the appalling goat tracks that pass for roads on the Isle of Wight, unloaded from the van and bumped across the cratered and uneven back lawn, it was not that far out and even if it had been, the large bolts make it a joy to do and not a boring chore. It took 30 seconds to line up the secondary and then the primary – it was FAR easier than either my 12 inch or my 8″ scopes.

I did discover a slight Telrad fail – I’ve put the base in the wrong position. It’s not a big problem but I could have done with putting it next to the finder. I’ll move it at some point, and I’d like to screw the base to the UTA, rather than have it fixed by means of the adhesive base, but it’s going to be ‘fun’ getting it off to move it. It’s not a big deal, it just means that I have to walk round the scope to the eyepiece once I have located something. 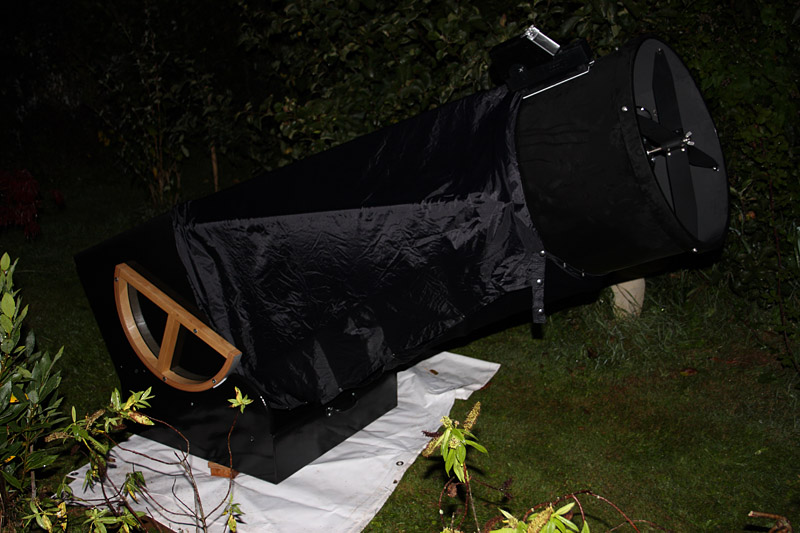 When it got dark, the Milky Way was as good as I have ever seen it, with the Cygnus rift very striking and the rest iridescent. It was very prominent right down into Sagittarius. I forgot the SQM, but the naked eye limiting magnitude was at least 6.2.
The neighbours’ lights were annoying as usual, and I wish they’d adjust their insecurity light as it blitzes everything. Luckily that only seems to be put on when their dogs are out having their late night piddle. I wish they’d move away and a nice elderly couple who go to bed at 8.30 and who don’t have all the house lights on would move in instead!

First up, as it wasn’t dark and I was just itching to look at something, was the Alcor-Mizar system.Very nice at 90x, with the jewels blazing brightly. As this is an f/4.3 mirror it was evident that I need a coma corrector, such as a Paracorr but I can live with it for now.
I didn’t take any notes, beyond writing names down, either; this wasn’t a ‘serious session’, it was more a case of getting used to the scope and to the ladder I needed to use with it, rather than a proper serious observing session.

NGC 7006, globular cluster in Delphinus – I’ve seen this on quite a few occasions but never as good as this, and this was with the sky still dark blue. At 247x, it was resolved and the core was very dense. 90x, 247x

NGC 7331, galaxy in Pegasus – This was the best ever view, the galaxy appeared very large and bright, with a bright tiny core. Elongated north-south. 90x, 247x.

The scope is a bit stiff to move, although not hugely so and I expect the stiffness will wear off in time. Besides, it’s better for it to be slightly too stiff than too easily moved.

I packed up at 2130 just before the moon rose as the clouds had returned (contrary to the weather forecast!). I took the scope to bits and returned it to the shed, after carefully drying it off. The shroud was wet through and that’s now hanging over the landing rail to dry.

In unrelated news, I have decided to get another car. My Citroen is getting a bit old and I’ve never really liked the thing as it’s too small, feels ‘cheap’ and is easily ‘bullied’ off the road, so I have traded it in for a Renault estate. Hopefully I can pick the new one up on the 24th. It has an added bonus in that the big telescope will fit into it, as I decided on the spur of the moment to change my car, I thought I may as well get a bigger one while I was at it. The only downside is that the tax will cost more and it will also cost more to run.