I have just returned from the 3rd IWSP and, while it was an enjoyable event, I have decided that camping in March is a Bad Idea. Never, in my entire life, have I been so cold so, next year, I will get a chalet instead. Because it was so cold, I ended up sleeping on someone’s chalet floor (thanks Iain!)! 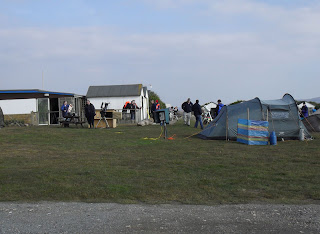 One corner of the star party site, showing the kitchen (self catering), the dining room area (left) and various attendees. 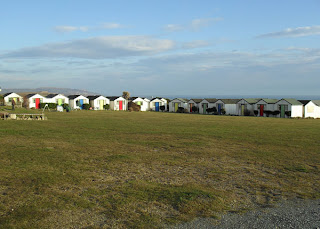 Some of the chalets 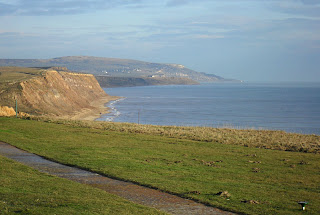 The Island coastline, looking south-east, seen from the campsite. 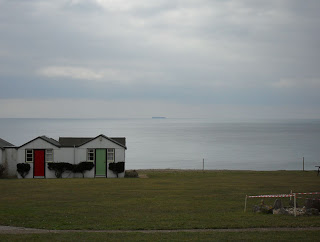 Looking south, over the English Channel. There’s nothing between here and France except sea, the only light pollution comes from ships, such as the container ship heading down the Channel from Southampton seen in the distance.

The star party began on Thursday, but as I was stuck in my temp job until lunchtime Friday I didn’t get there until late Friday afternoon. After going home and packing my stuff into the car I went to Brighstone via the VAS Observatory at Newchurch, which was hosting an open day for star party attendees. On leaving the observatory, the heavens opened and it was torrential rain for the next ten miles to the star party site – not a good omen. I put up my tent, amid much swearing – and with help from fellow star party attendee Richie Jarvis – in rain and wind, and wondering just what the hell I was doing.
On check in at reception I had been told that I was doing a talk and that it was on the Texas Star Party and that I was doing it that evening at eight o’clock. There’s nothing like being well prepared to do a talk and I wasn’t, but fortunately I had brought my remaining working laptop with me which, even more fortunately, had a load of hitherto-forgotten photos on it – including a bunch of ones from TSP 2006. With the help of Power Point I managed to cobble something together, gave the talk and it went down well, initial technical issues with my slow old laptop and the projector aside.
During my talk, it had cleared so we all got ready and went outside. We got an hour in before clouds rolled in again and I spent most of it observing with Owen Brazell and his beautiful 20″ Obsession. I also took peeks through a 14″ Orion Optics (UK) dob and a 12″ Skywatcher dob.
The sky closed on us and we went back inside for a talk by Owen on observing galaxy clusters, which was a very interesting talk, as this is a subject I am very interested in, galaxies being my favourite deep sky targets. Once Owen’s talk was complete we looked out but the sky remained obstinately shut so I headed off to my tent. This is where things started to go a bit pear shaped. I am not much of a camper but, so I thought, I’d brought enough blankets, sleeping bags and clothes that I would not go cold. By 2 am I was very cold and decidedly not happy. I got out of the tent and went over to the kitchen, where other party goers were gathered: ‘Fuck camping, I’m freezing!’ were, as I recall, my exact words – in fact, I was so cold I was considering gathering my valuables, putting them in my car and heading home but Richie lent me a cable and Iain Melville lent me a fan heater and I spent the rest of the night a much warmer and happier person, lying in my tent and listening to the patter of rain on the fly sheet.
The next morning, Saturday, dawned sunnier and much more pleasant. The wind was cold but, out of it in the sun, it was reasonably warm. The vendors set up, although, there was nothing I needed, and there was an astro-jumble where we could sell any unwanted items. Owen Brazell had a selection of TeleVue eyepieces he no longer needed, including a 16mm Type 2 Nagler. I didn’t buy the Nagler (beaten to it by Iain) but I did bag a lovely 22mm Panoptic which has now joined my other eyepieces, snug in their case. It’s made my 25mm TeleVue Plossl redundant, so I am going to have to find a home for it. I am looking forward to trying out the new arrival!
The afternoon was spent sitting around and periodically checking the football results online, via BlackBerries, iPhones and laptops. Among the amateur astronomers gathered were a QPR fan, a Spurs fan, a Southampton fan (me – and I am pleased to say Saints beat Leeds 1-0), a Crystal Palace fan and fans of various other clubs. People were also checking the Six Nations rugby scores (England could only manage an abject 15-15 draw against Scotland) and the Formula One Grand Prix qualifying session in Bahrain.
A couple of people were observing the sun, with a Coronado and a Lunt solar telescope. The Sun had some spots and the most spectacular prominence which later detatched. I tried taking a photo through the Coronado’s eyepiece, with mixed results. I couldn’t get the prominence but did get the spots and granulation (click for larger photo). 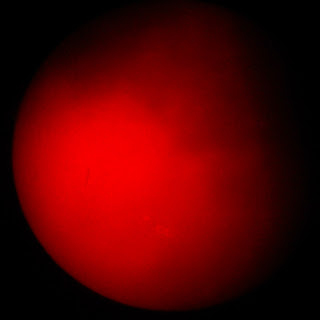 There was a spectacular sunset, which promised at least some observing the coming night: 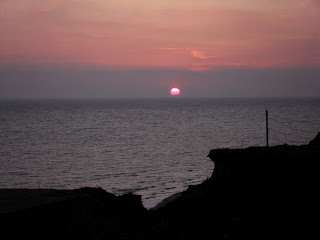 After dinner, we got ready and uncovered the scopes. I am going to put the observations in a separate post, but I again joined Owen and the 20″ and we looked at both the bright and famous as well as the faint and obscure. I suggested we have a crack at the Horsehead Nebula, something I have never seen, despite several attempts. We indeed saw B33 and the bright nebula it is in front of, IC 434. If it wasn’t for IC 434, B33 would be invisible as it is highlighted against the ‘bright’ nebulosity of IC 434. Once I got my eye in, the shape was obvious and, after a minute or two of looking, could just about make out the horse’s nose as well as the rest of the head. This was even better than Saints beating Leeds and was, for me, the observing highlight of the evening.
Other highlights included Abell 21, Jonckheere 320, Jonckheere 900, M42 (which was absolutely spectacular in the 20″), M82 and the Trio in Leo.
The Obsession 20″
and an Orion Optics UK 14″ Dob. 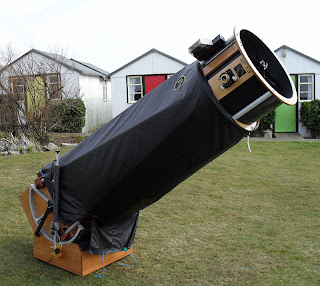 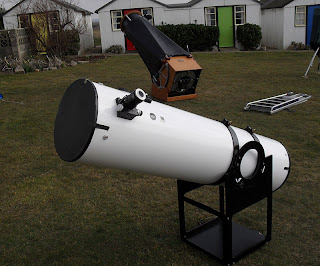 After about three hours, the weather decided that it was going to be a pain again and shut us down. After listening to a late talk by Richie, we looked outside again, but the sky was so bad it wasn’t worth the bother, so I headed to my tent. It was then that a mini-disaster struck, as the fan heater I was lent decided not to work anymore. By then I was cold and I certainly wasn’t going to shiver in my tent all night so I found Iain and told him that his heater was either buggered or I was doing something wrong. Iain declared it ‘buggered’ as it was quite old and told me to get my sleeping bag, etc, and doss on the chalet floor. So, I fetched my valuables, sleeping bag and mattress from the tent and spent what was left of the night on the floor which was warm and pleasant after the tent.
After the raffle I decided to pack my car and head home. I would have liked to stay on, but work on Monday morning and the horror of the tent made it not possible so, after farewells, I came home. Between Wroxall and Whitely Bank I had a brief moment of confusion when I tried to remember where I was. I think that mild hypothermia and sleep deprivation were the cause of this and I am glad I got home in one piece.
It was a good star party, although my ‘domestic arrangements’ were a disaster with the conditions being so cold the tent was untenable. Next year, I will get a chalet. If it hadn’t been for Iain helping me out, I’d have packed in and gone home on Friday, as I had mild hypothermia and was not a happy person. Also, the communal shower area was hideous. It wasn’t dirty, but it was freezing, the stone-tiled floor was horribly cold on feet, painfully so, and the shower was uncontrollable – but at least it was hot, rather than freezing.

And, why do I never do anything in raffles? But the raffle was still worth attending, just for Owen’s reaction to winning a Revelation eyepiece set! It was negative, but hilarious.

On the upside, when it was clear, the observing was good, and I managed to bag the Horsehead for the first time. There’s no substitute for aperture and good, dark skies, and it shows. I now have aperture fever and am wondering how long it will be before I can afford a 20″ of my own – I hope that by the time I have saved £4000 David Lukehurst is still making his big scopes.
I will make a separate post about the observing and put it up tomorrow.